Just for a laugh, I thought I'd introduce this page with a little bit of fiction, inspired by a comment my would-be opponent Mike made when I sent him one of these photos. If you laugh at the end of this, it's all down to Mike.


This is Recon flight one-alpha-seven. Do you read me, Command?
Command reading you twenty-by-twenty. All still quiet?
Not sure, Command. Reading something over a ridge a few clicks South West. It's outside my grid and I'm pretty much off the clock here. I'm heading back in. I'm transmitting the Bogey's co-ordinates now so you can get one-alpha-twelve to check it out - it's in her grid.
Negative, one-alpha-seven. We lost contact with one-alpha-twelve a couple of minutes ago. We need to you check out that Bogey, but proceed with caution.
OK Command. Going into overtime.
The Emperor doesn't pay overtime, one-alpha-seven. Adjust your heading and report back ASAP. Out.

One-alpha-seven laid in a course to take him on a circuit around the ridge, his Valkyrie bucking and juddering as it got nearer the location he was scouting. That in itself was unusual - the Valkyrie's sleek design and powerful engines normally cut through atmospheric turbulence as though it wasn't there. More unusual were the energy disturbances his dials were starting to show. He almost didn't notice the fact that the sky was brightening up to daytime levels even though it was 02:00.

For the love of the Emperor! Command! Command!
What is it, one-alpha-seven?
Chaos force pouring out of a fissure in the sky! Massive numbers - Titans, Tanks and foot troops. Too many to count. Going to get some images and get the hell back. Transmitting scans, data and images back now. Confirm receipt.
Confirmed - we see it. Good work. Get out of there.
Coming under fire. Doing my best. <FOOM> Damn! That was close!

One-alpha-seven made it back. The maintenance crew weren't quite sure how.

Command this is flight-deck maintenance. Reporting in as directed. We're stumped on how one-alpha-seven made it back. His Valkyrie was almost completely out of fuel, its afterburners are completely burnt out. He must have given it some hammer getting out of there. It's going to need a complete refit. As for the interior - could you dispatch a seat-cleaning servitor down here? 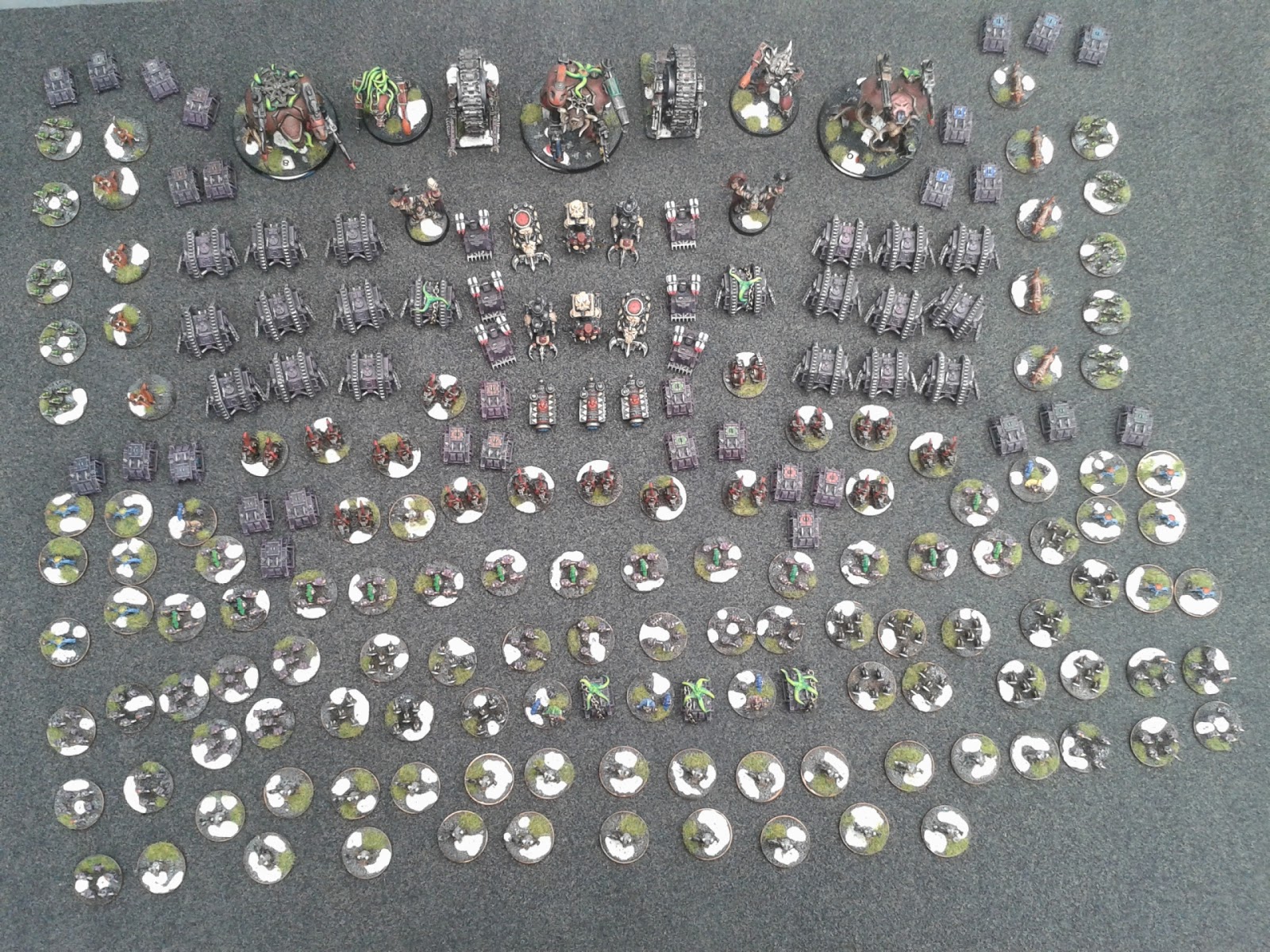 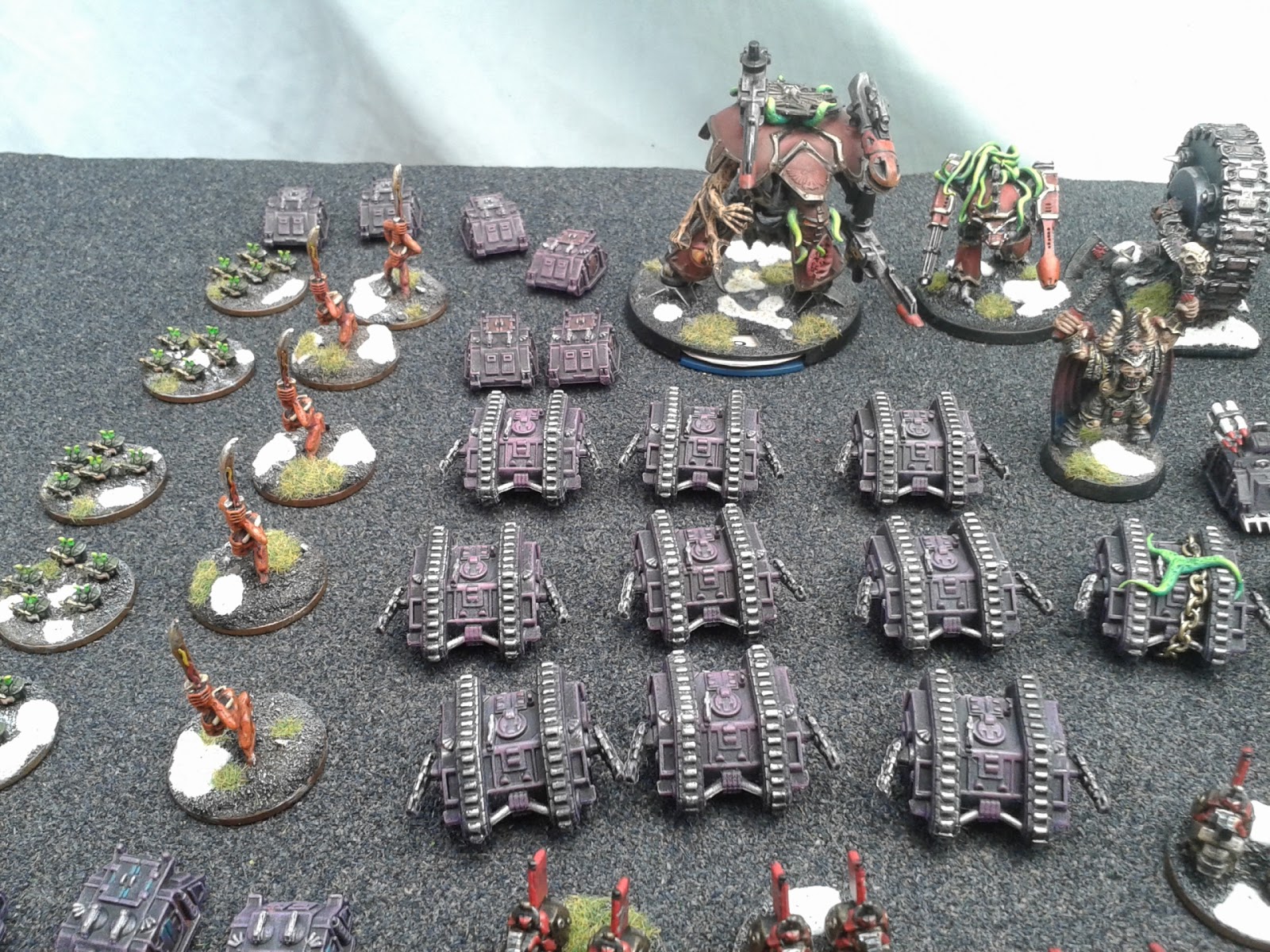 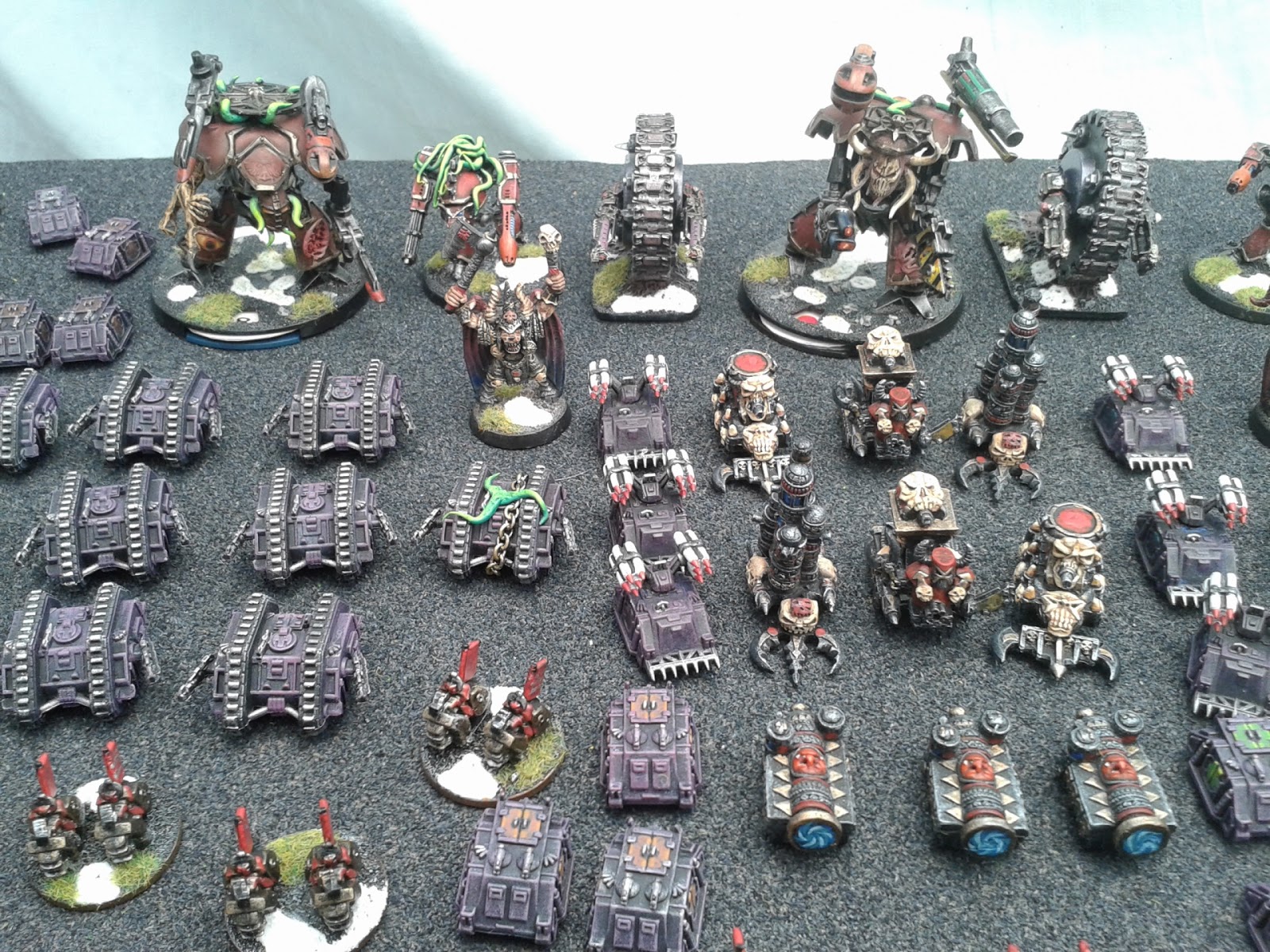 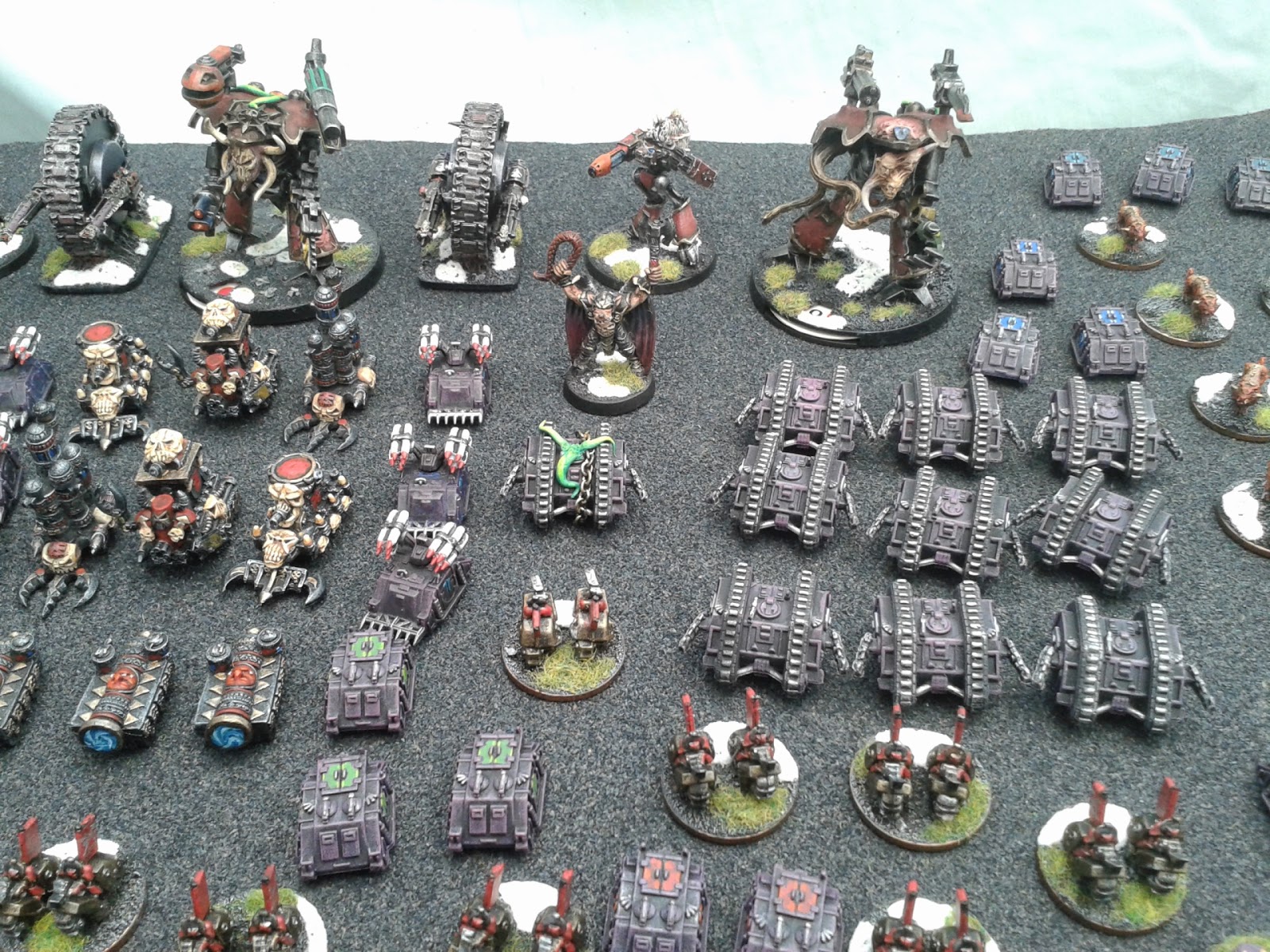 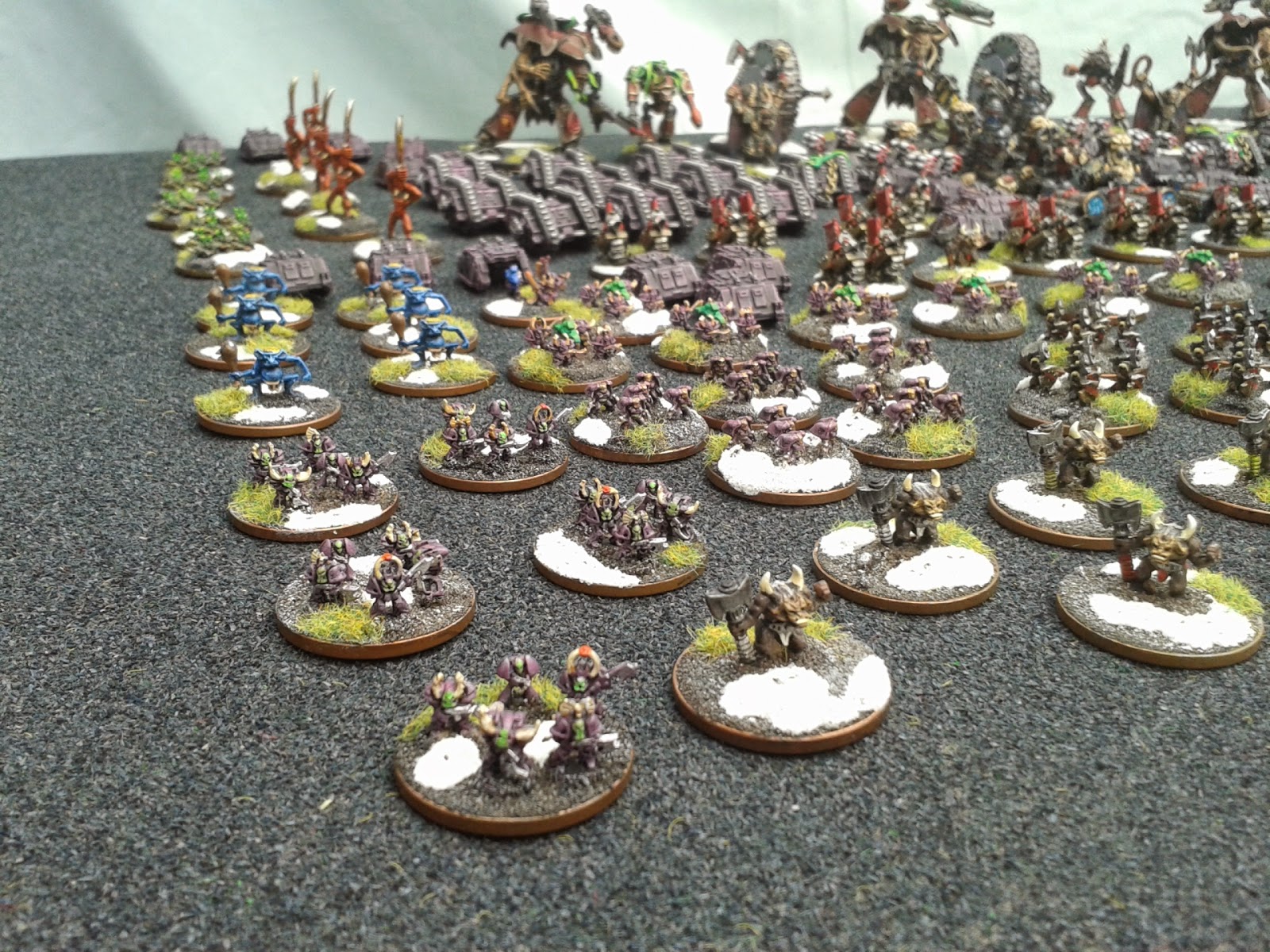 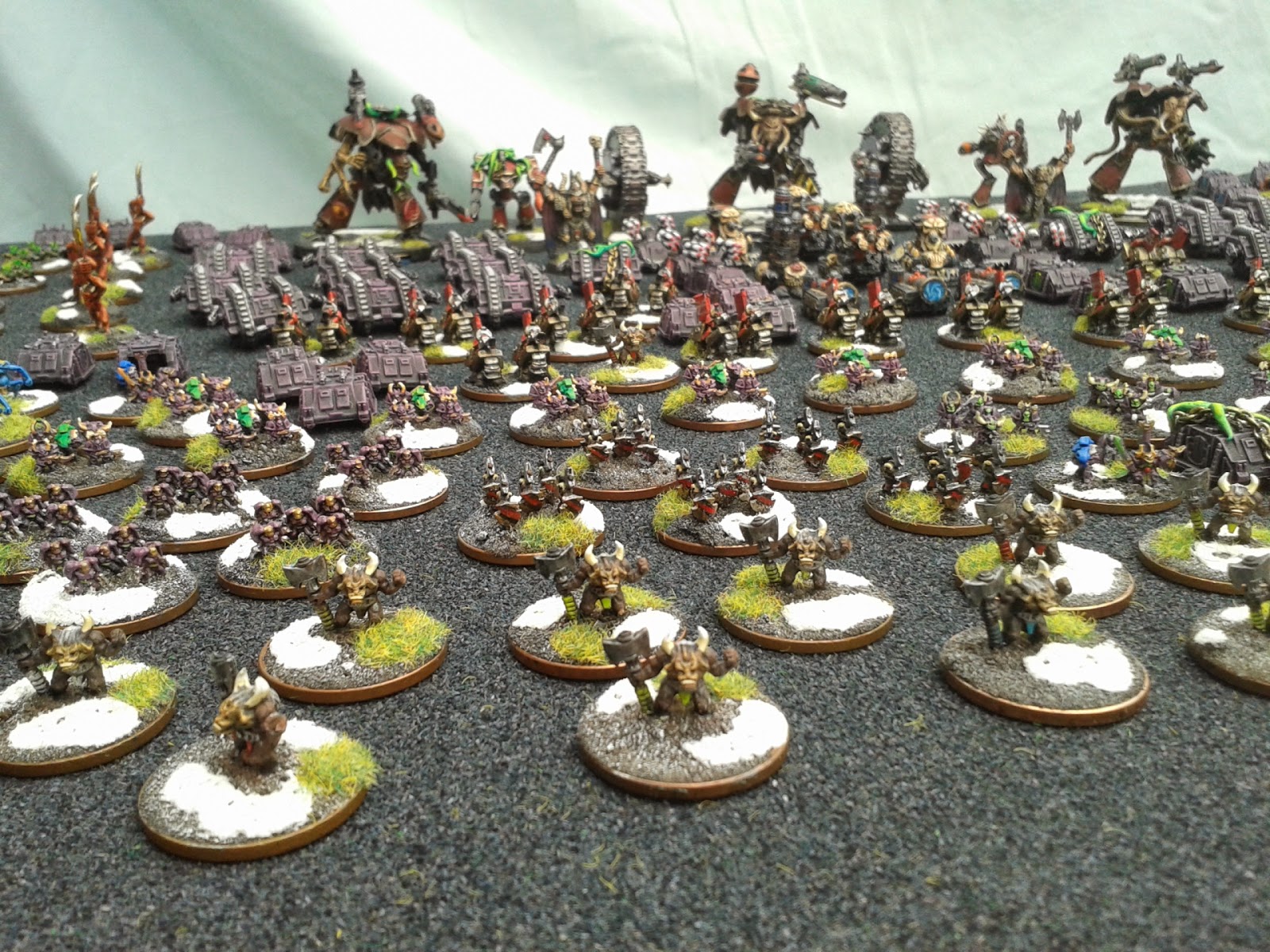 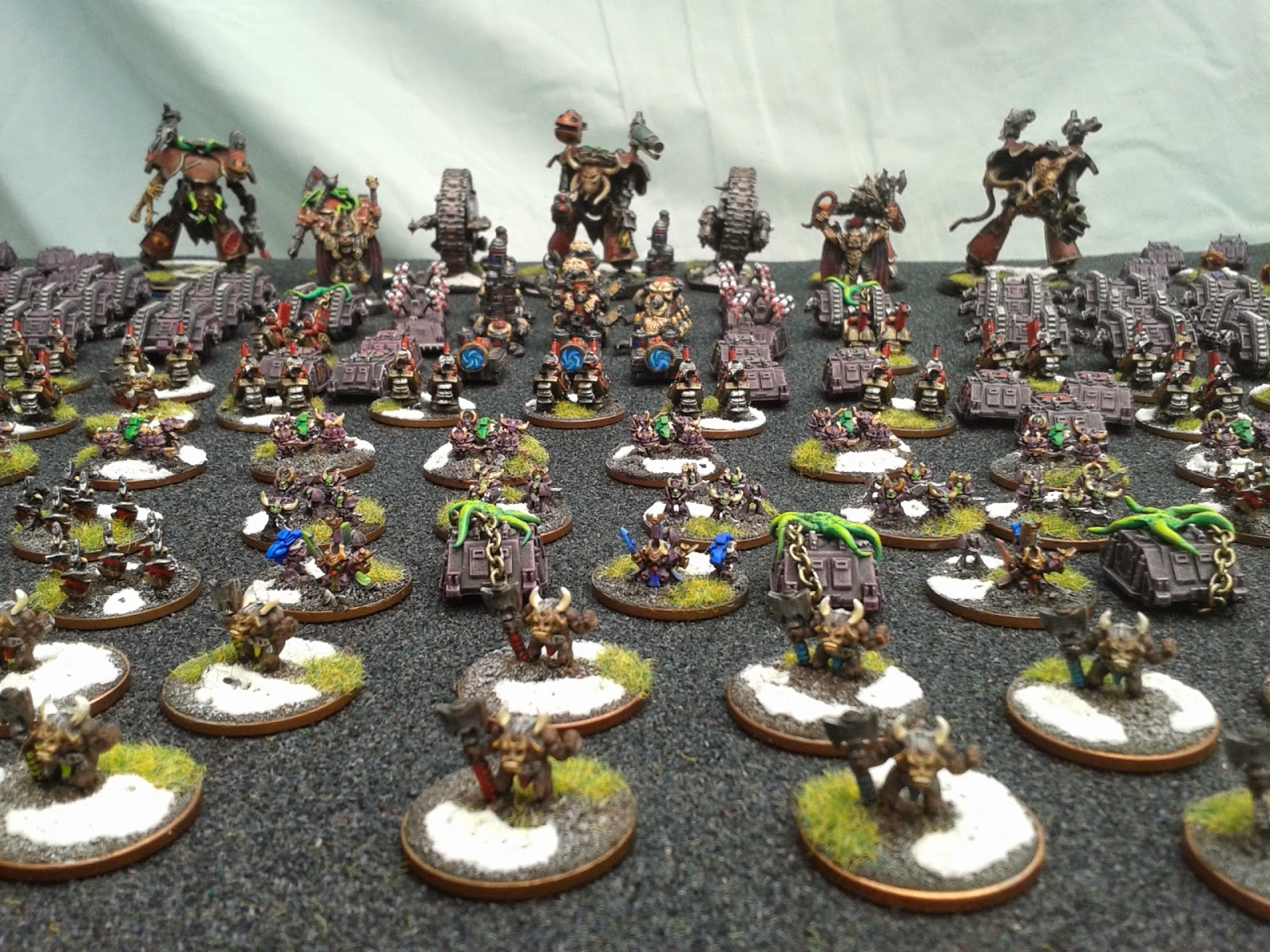 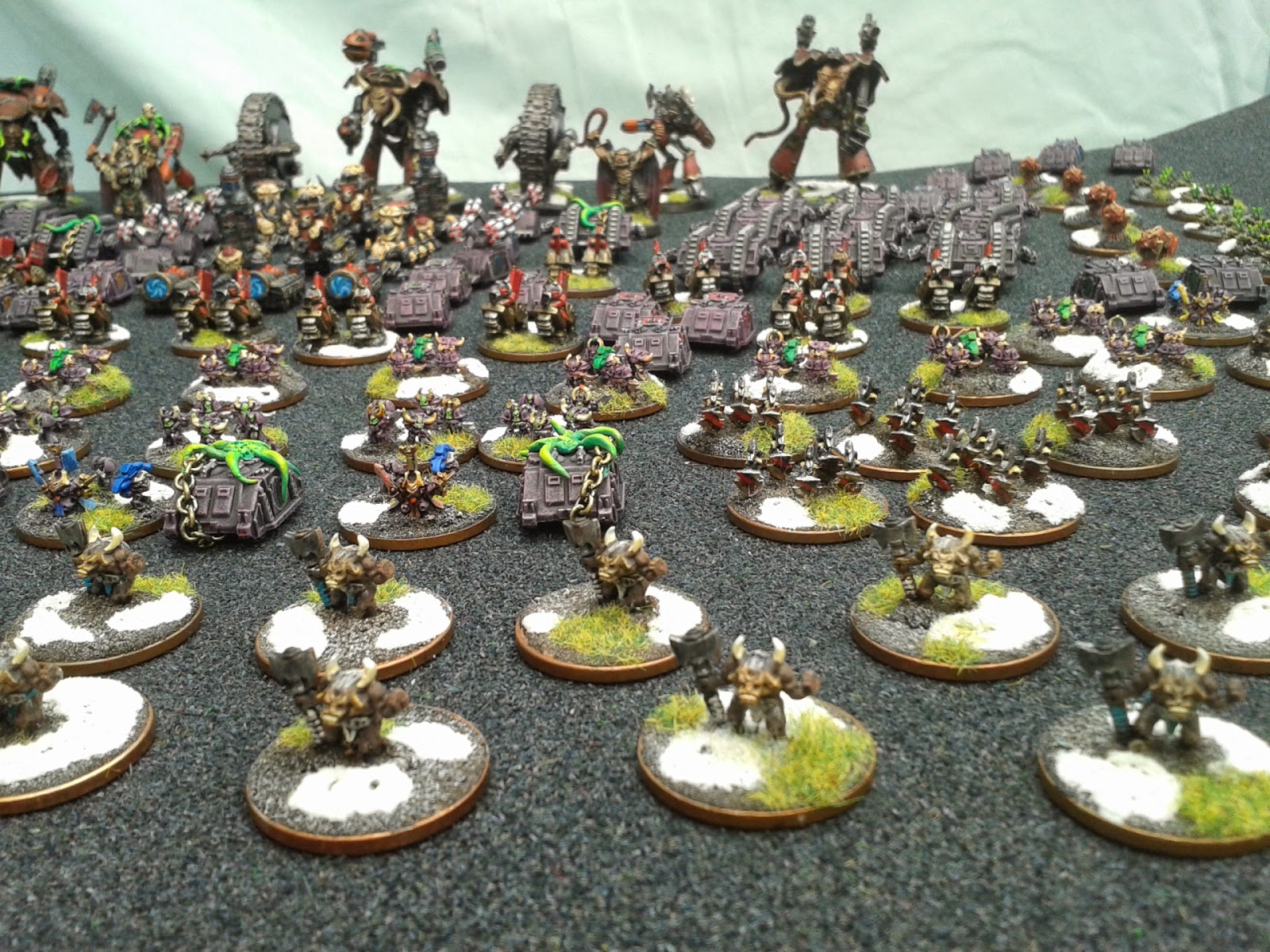 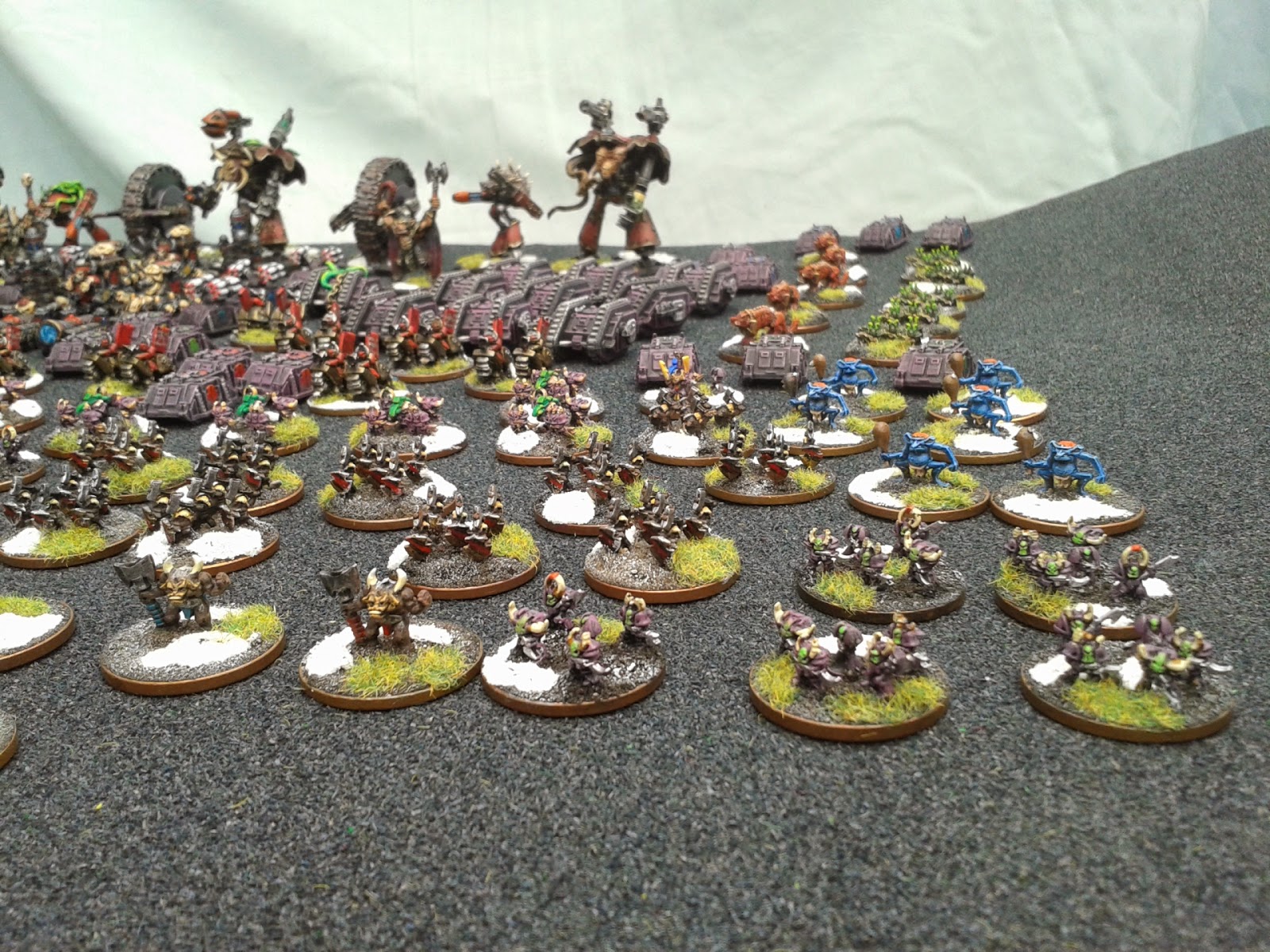 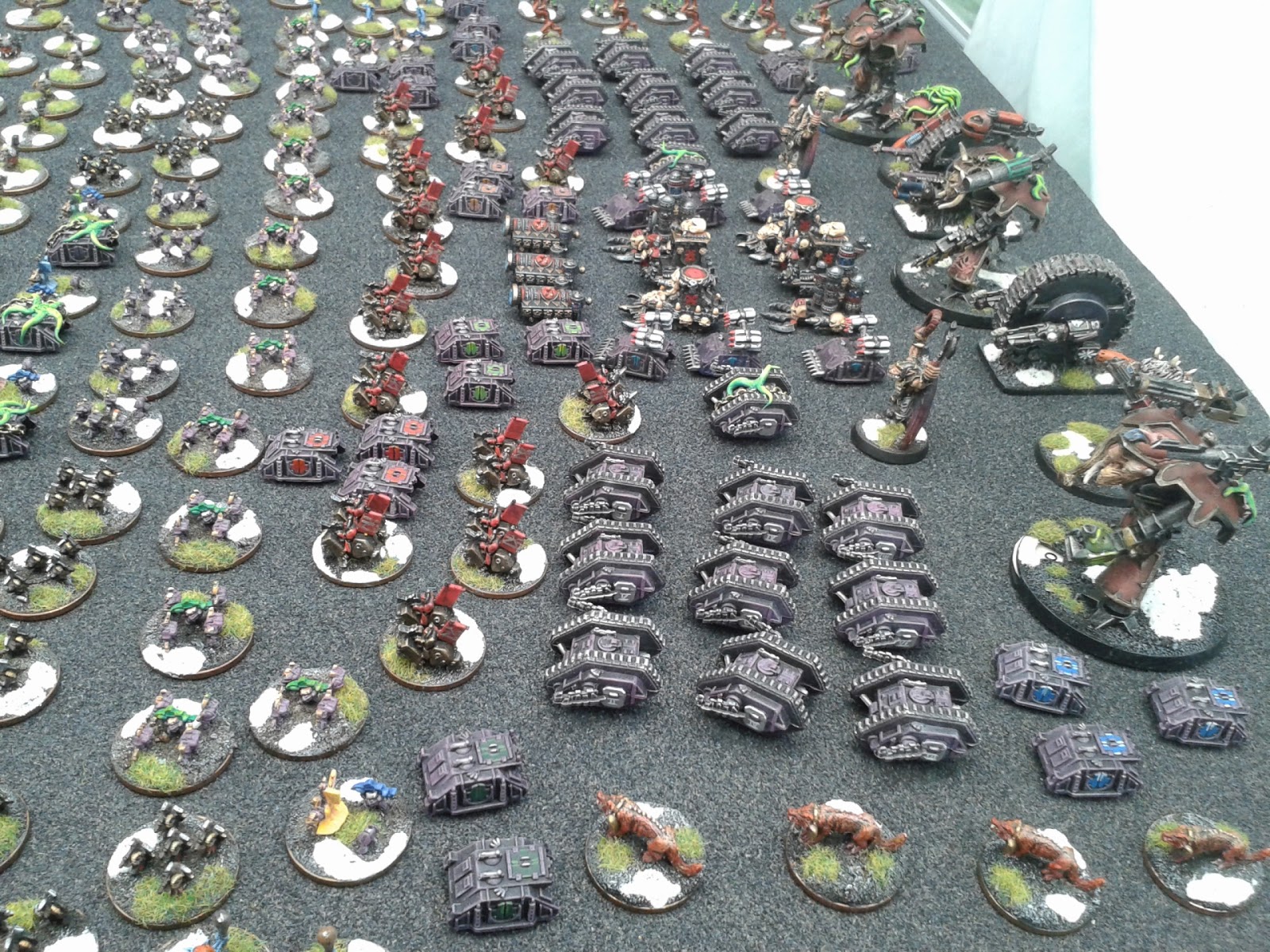 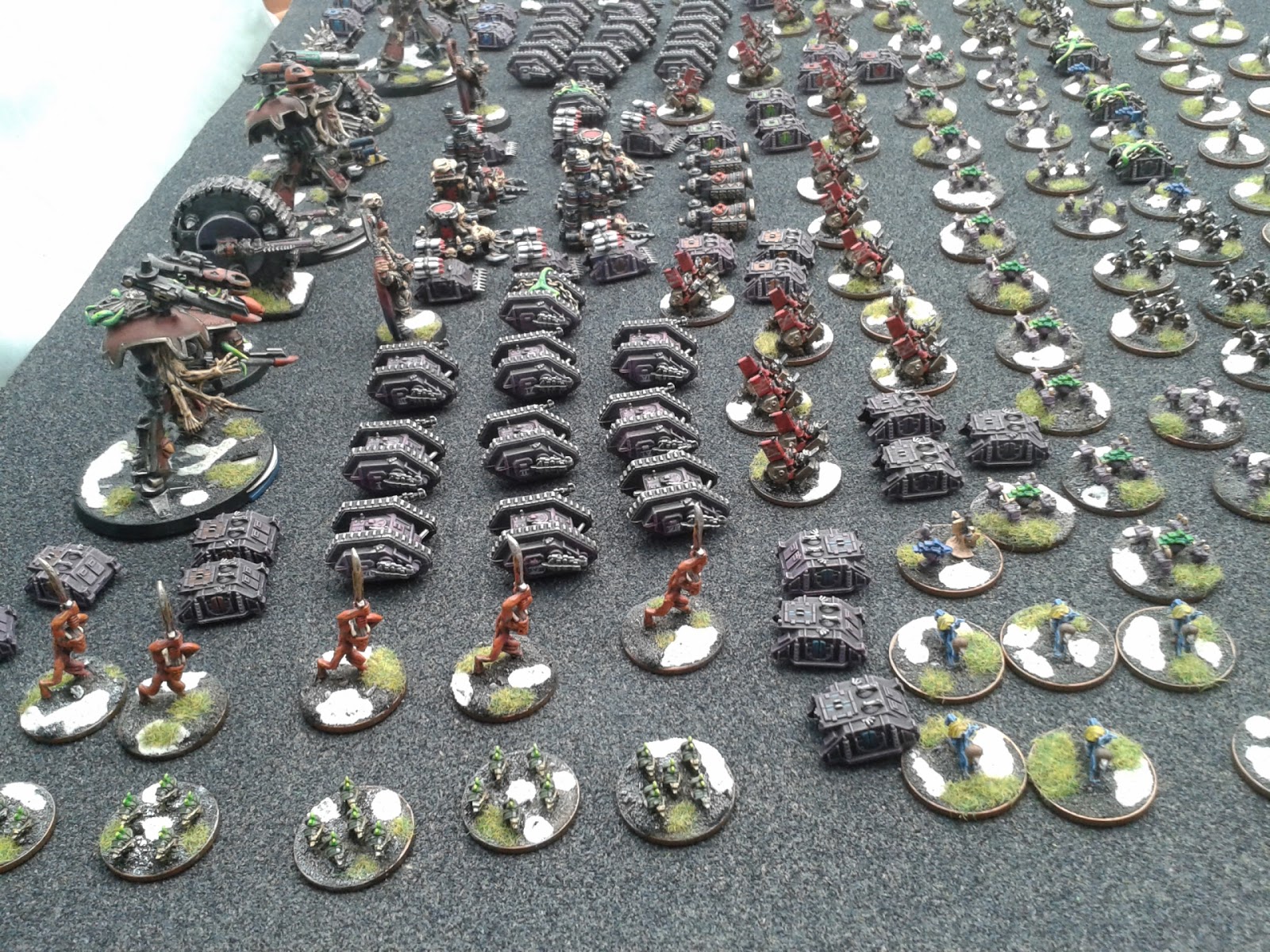 Overall working time on this lot - 3.5 months. That's about 45 mins per day, 4 or 5 days per week. So roughly speaking, about 54 hours work (so about 3.5 models per hour given that it's an army consisting of 183 playing pieces). I'm happy with that, especially given all the build-and-conversion work I did on the Command Tanks, Titans and Death Wheels.

The complete list of posts (including links) for the project is as follows:
Next Project: Warhammer 40,000 Tau. Stay tuned.