I'm still well pleased with the finished results for this clan. I'm not sure which clan I'll paint up yet - I have Van Saar and Goliath to think about. I really want to do some Palanite Enforcers and some Genestealer Cult too. 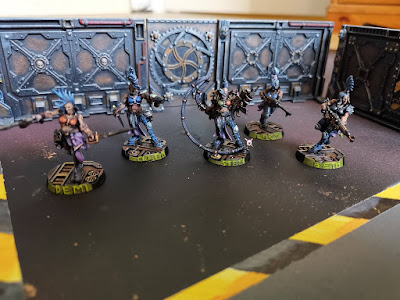 Building was challenging too - so many bits! For armament I stuck to the loadouts in the instructions in the kit. I swapped heads and hair around.

I'm proud of the way they turned out, though.My only concession to uniformity is the hair colour - I decided these ladies would all got for the same highlighted blue hair. Like bad-ass Marge Simpsons.

I've named the models after key players from the 2019 England Women's Football World squad. The name banners on the bases are painted to indicate the forward arc and the template fits them nicely. 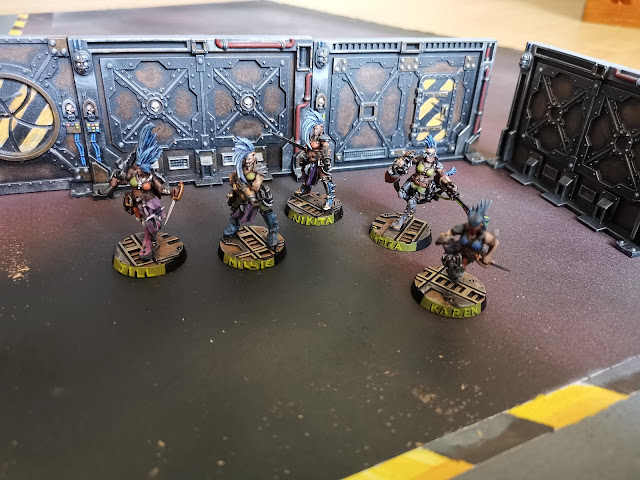 As a distraction from all the Middle Earth stuff I'm working on I have taken on a mini-project as an occasional breath of fresh air.

Well, I suppose it would in actuality be foetid, rank, recycled air.

I've travelled into the Hive World of Necromunda for the first time.

I was recently given the boxed set and a box of Van Saar to I'm doing occasional bits of work on them. I've been going at it off and on for a few weeks whenever I need a break from Middle Earth stuff. I've only just got around to taking any photos though.

So I present to you here the stuff I've done so far, in the order that I did it.

First up, I decided that as well as the Zone Mortalis stuff that comes in the box I was going to pick up some MDF walkways/gantries etc. I'm not presenting any of that here ('cos I haven't built it yet!) but it stood to reason that I was going to need a playing surface.

I happened to have a 4' x 4' hardboard sheet lying around, so I got to work with a few rattlecans and some masking tape and produced this:

I have also painted up some of the scenery items from the boxed set:

I have also painted up the Escher models from the boxed set and will present them in the next post.

Hi all - here are the remainder of my DIY Goblin Captains. As I mentioned in my previous post, I have an issue with the ME: SBG Hero tax which means you are obliged to fork out bundles of cash for no-mark captains which are currently only sold in resin from Forge World.

I'm pleased to note, though, that since I wrote that I've seen a couple of releases from GW for plastic heroes so maybe things are going to change a little soon.

Anyway, in the meantime, here are my remaining Goblin Captains. All are conversions from standard Goblin plastic line troops.