Following on from my earlier WIP post about my Juggernauts, I've finished them off.

All that was really required was some touchups where I'd removed them from sprues, some Khorne logos on the banners and some paint/snow/static grass on the bases.

I'm pleased with these guys - motivation on the Epic Chaos stuff is running high. I'll hopefully get an update in soon on my Bloodletters.

Other Epic: Chaos-related stuff
Posted by Dean Kelly at Wargames Wasteland at 08:00 No comments:

Whilst the PVA was drying on the bases of my Juggernauts (which seems to be taking an age - possibly because they're based on 2p coins) I decided to quickly knock up another unit.

This time it's a hastily drybrushed unit of Bloodletters. This was simply a series of drybrushed layers over black paint. White, Blood Red, Blood Red again, Blood Angel Orange and finally Sunburst yellow.

At the point the following photo was taken, the swords have been painted in Shining Gold and highlighted with some Chainmail and some sand has been PVAd onto the bases. 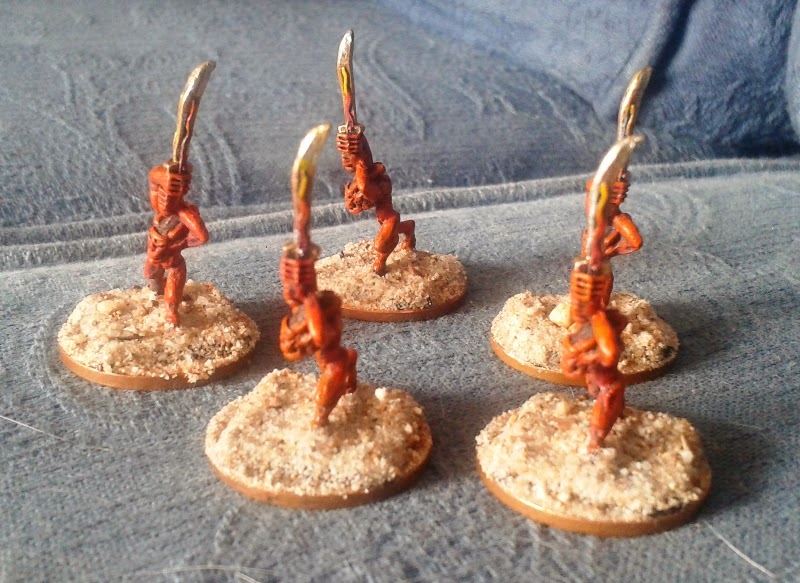 Other Epic: Chaos-related stuff
Posted by Dean Kelly at Wargames Wasteland at 04:32 No comments:

Progress has been slower than I'd have liked over the last week or so but I wanted to get something on the blog about the work I've been doing as I've not been idle (just frustrated).

I've been trying a new "technique" (for want of a better word) of painting these models whilst still on the sprue. Due to their small size (and the Marines/Beastmen/Squats that will follow are even smaller) they're very tricky to hold. I know from past experience when I first got hold of Epic-scale models that basing them first and painting afterwards is a royal pain in the sphincter so I wanted to try something different.

So I spray-painted the whole sprue black and the rest is basically dry-brushed: 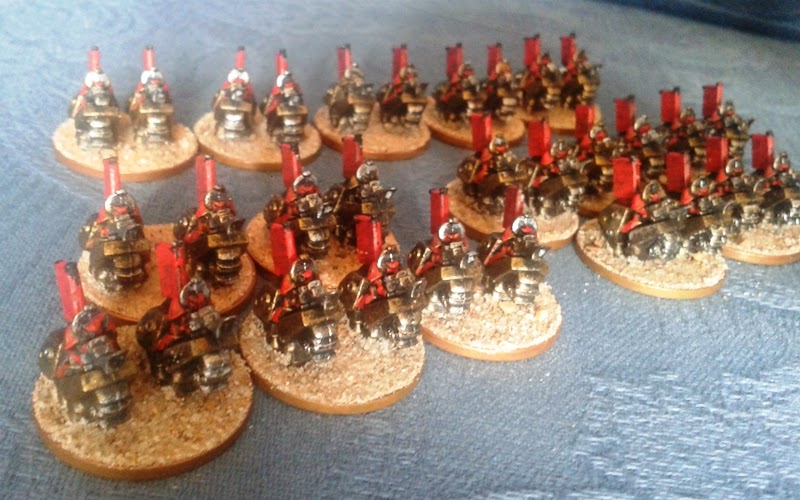 As you will no doubt notice, the bases are unfinished (they are 2p coins with the models super-glued on and then PVAd and dipped in sand) and require painting. There are also numerous bits that need touching up where the models joined the sprues, and the banners need some kind of a detail added. Probably a Khorne logo. Still deciding on that one.

I'm not going to go overboard on the paintjob for this army - I'm happy with "rough-and-ready" tabletop standard for the rank-and file. Bigger models might get a bit more attention.

Other Epic: Chaos-related stuff
Posted by Dean Kelly at Wargames Wasteland at 07:23 No comments:

I appear to have well-and-truly sidetracked myself into working on this army! I *was* painting Elves for Blood Bowl. Must try to interleave both jobs.

Anyway, I've spent a couple of hours in bits over the last few days making a start on my Chaos Marines force (tentatively known as "The Sons Of Eternity") and have, so far, got a shedload of vehicles done:

I need to work out a way of taking a couple of tanks from each of these sets and "tarting them up a bit" so they can be used as command vehicles. I'll probably just add some chains to them - that seems nice and Chaosy.

Other Epic: Chaos-related stuff
Posted by Dean Kelly at Wargames Wasteland at 07:42 No comments:

Epic: Chaos Marines (my next project)

I was rummaging around in my loft the other week and came across a bunch of stuff I'd forgotten I'd got.

My friend Mike and I were big fans of the orginal "Adeptus Titanicus/Space Marine" games when they were first released at Version 1 and the update to Version 2. By the time GW created "Epic: Armageddon" (which featured a complete rules re-write" we'd completed our stint at University and our opportunities for gaming lapsed. Neither of us really liked the Armageddon rules anyway, so the entire thing fell by the wayside.

At the time we were both really just playing Marines - it was a Heresy setting so Marine vs. Marine was perfectly valid. I remember collecting models for Imperial Guard, but when I found this little treasure-trove in the loft I was somewhat surprised to find I also had models for Chaos, Eldar and Orks too.

Mike and I had recently talked about having a game of Epic W40K and I'd just stumbled across the awesome Net Epic rules resource (apparently others besides us were not enamoured of the Armageddon rules either, but wanted to be able to keep up with a lot of the new forces GW released for the game like Tau, Tyranids and so on. The Net Epic guys took it upon themselves to maintain and expand the V2 ruleset to allow players to continue to game with that ruleset and expand the meta too).

So we've started planning a game!

I'm going to build and field a Chaos force, which currently looks like this:

Other Epic: Chaos-related stuff
Posted by Dean Kelly at Wargames Wasteland at 10:06 No comments:

It's my (actual) birthday!

Well it was - yesterday.

Got some goodies I can't wait to try out! A new airbush and cleaning station, to replace my old dodgy cheap brush: 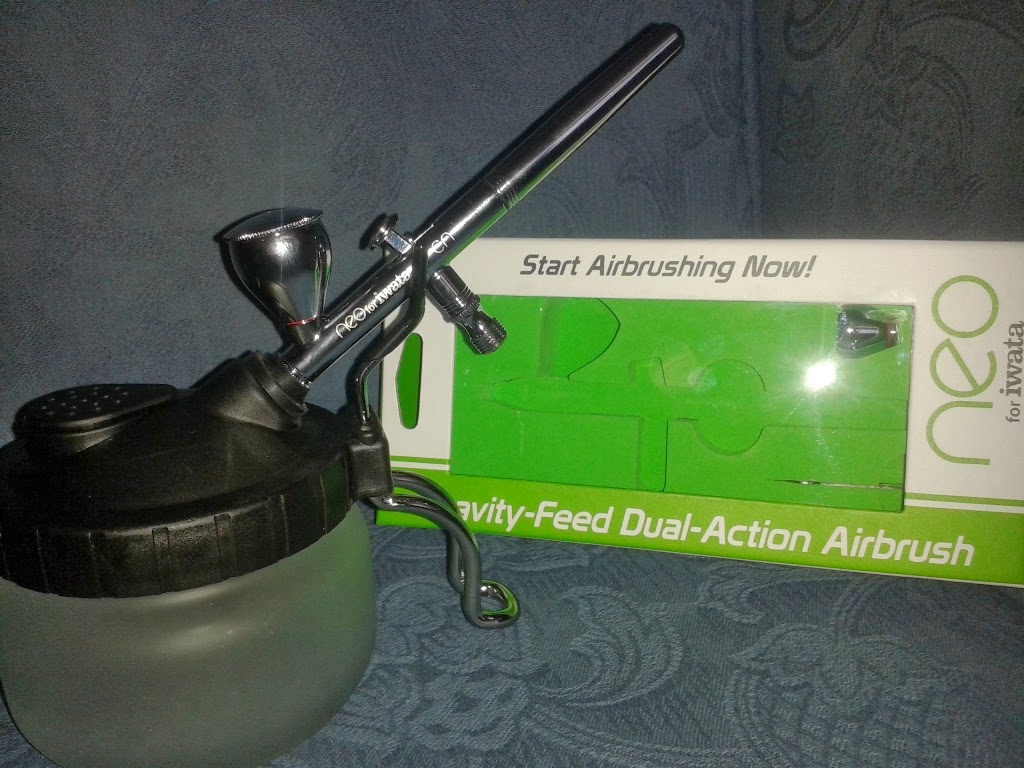 I'm shortly going to be starting work on an Epic-scale W40K Chaos army and have some ideas on how to use this on some Daemons and my Titans.

All I need now is time to learn and apply some skills!
Posted by Dean Kelly at Wargames Wasteland at 07:52 No comments:

It's going slower than I'd hoped!

My plan was to plough through these guys knocking out two or three models every two or three days. Family illnesses, a birthday and my inability to stay focussed on any one project for more than a few days got in the way (I knuckled down and finished off my Valkyrie instead).

Anyway, I've completed another pair of models for the team:

More news as it comes in (but bear with me - I'm already being distracted by another task I have waiting: an Epic W40K Chaos army).
Posted by Dean Kelly at Wargames Wasteland at 07:48 No comments:

I took a long time over this project as I really liked the model. I'm very pleased with the results especially since I employed some new techniques on this model (for example Oil Washing) and along with the Baneblade tank I painted directly beforehand (covered in my "Painting: Imperial Guard Baneblade - WIP" posts) forms the best work I've ever done on Warhammer 40K Vehicles.

The Baneblade and Valkyrie have certainly galvanised me into revisiting the rest of my Imperial Guard armour and bringing it up to the same standard. Posts on that work will follow in due course.

For now, here are some pictures of the finished model:

Posted by Dean Kelly at Wargames Wasteland at 06:30 No comments: