I semi-accidentally seem to have fallen into building a Warhammer 30K/Horus Heresy army.

I was looking for transport options for my Imperial Guard/Astra Militarum army and found a tank up for grabs on eBay for a snip. I grabbed it up before I realised that it was actually a Solar Auxilia Heresy-era tank.

It was in a shocking state when I got it; Mis-built, parts missing etc.

I knew very little about this tank when I got the model. A bit of research told me that it could carry 10 troops if fitted with a demolisher cannon, or 20 if fitted with a twin-linked lascannon. When it arrived, it had neither. In it's place was some sort of control-panel gizmo which as near as I can tell has nothing to do with this model.

The model should also have a searchlight (missing) and a pintle-mounted weapon (missing).

Also missing was the gunner's head.

I wanted to be able to carry 20 troops so I went for the tl-lascannon option. I had a couple of old metal space-marine shoulder-mounted lascannon that I glued together. I then removed the control-panel doohickey and routed out a hole in the model and glued them in place, covering the join with green-stuff to represent a flexible cowling like on Chimera hull-mounted weapons.

I had an old flamer which I cobbled together with an old pintle-mounted storm bolter to make a pintle-mounted flamer. An old searchlight was added and the gunner's head came from one of the free-standing pilot models that come in the Valkyrie set.

Judging by the casting quality and the quality of the resin I don't think this is a Forgeworld original. It's a telling sign that it came in a box festooned with Chinese characters too, I think. As such there was a fair bit of warping so some green-stuff filling was required too.

There's not much I can do about the missing rockers from the back.

Still - it's shaping up!


Posted by Dean Kelly at Wargames Wasteland at 01:24 No comments:

Thanks to all who have stopped in to look at the work I've done on my Imperial Guard recently.

I've put a lot of hours into refinishing all of my tanks and that followed on from project where I rebased all my minis. My guardsmen have had a lot of love this year!

I've presented below a quick set of snaps of all my tanks, If you want to see the whole force - including foot, Sentinels and my Valkyrie, you can find it all here:

Posted by Dean Kelly at Wargames Wasteland at 02:28 No comments:

Strictly speaking, this is the final post for the Renovation Project. I do have one more tank that I'm working on but it's an entirely new addition to the army (and is actually a Solar Auxilia tank anyway!)

All my tanks are now at a standard I'm happy with, they all match in terms of finish and I've added three tanks to the roster along the way. 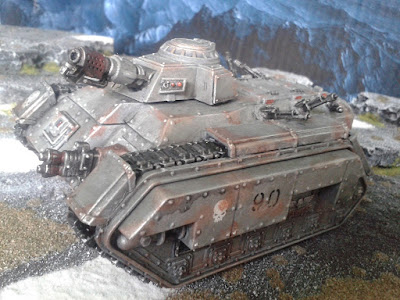 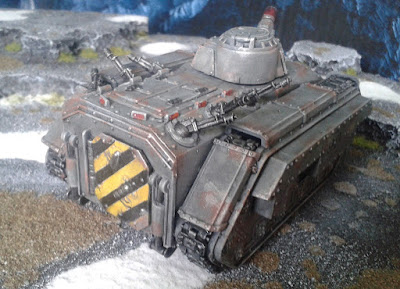 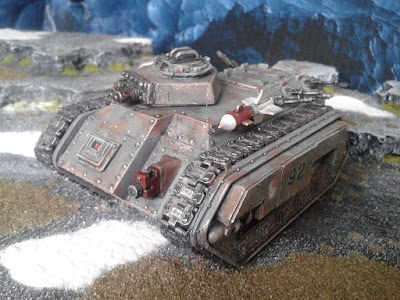 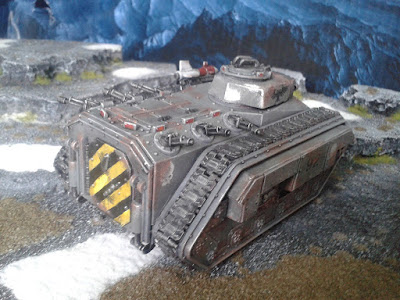 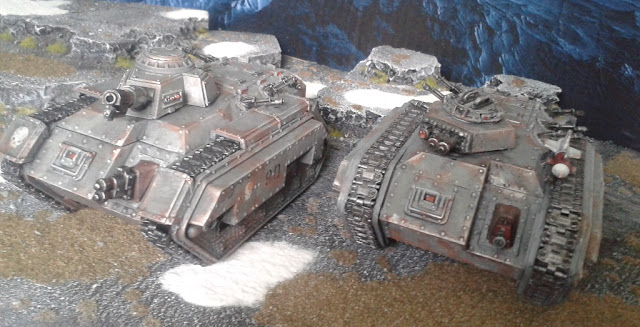 Posted by Dean Kelly at Wargames Wasteland at 01:09 No comments:

I've started work on adding some detailing after having completing the texturing work on the hull.

All the drybrushing is done and I've added some paint to turret weapons. Lenses are done too.


It feels soooo good to be on the home stretch with this project. Aside from finishing the detailing, decals and weathering, I've only got one more tank to do!


Posted by Dean Kelly at Wargames Wasteland at 01:57 No comments:

Two more Chimeras to do, but I'm only featuring one of them in this post.

My original tank-roster featured just two Chimeras. I wanted more transport for my troops. I'd made them more mobile by hiving off the heavy weapons teams into platoon support teams rather than being in the platoon squads proper, but having T3 Flak-armoured troops scuttling across an open field still leaves them pretty vulnerable.

So I wanted more transport.

Not averse to working but badly allergic to spending I found an ebay lot which I won getting 2 x Chimeras for just £20. The downside was that neither had any side armour or a turret.

Luckily I had the makings of a turret in my bitzbox (probably from the hellhound kit) but nothing for a second turret or side armour.

Side armour was easy - foamcore did the job nicely (as you may have already seen on my other chimeras when I tackled the first of the pair).

The turret I made somewhat ham-fistedly from card using a paperhammer template. I assembled it then used the best weapon I had (a hull-mounting heavy flamer with a bit of spare stubber for a "sight") which I hot-glued in place: 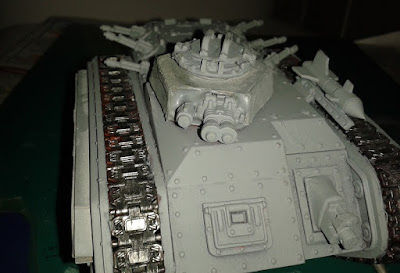 I then used some green-stuff to cover the ugly hole: 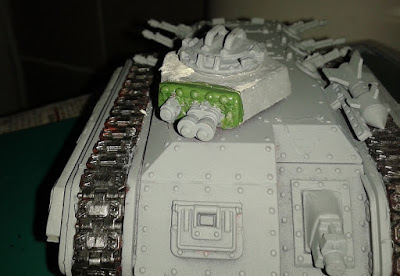 And here's how it looks with a bit of paint on it:

More news in the next update. Stay tuned.

Posted by Dean Kelly at Wargames Wasteland at 06:20 No comments:

I know I said I'd finished this tank, but as my buddy Greg Hess pointed out the tank was looking a little too tidy.

The tank's hull had been extensively weathered, but I'd neglected to scratch or blacken the Inferno cannon. 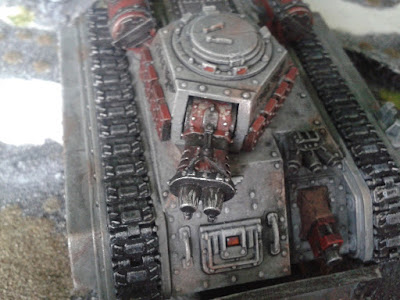 Posted by Dean Kelly at Wargames Wasteland at 06:28 No comments:

So here is the finished Hellhound with weathering and oil washes in place: 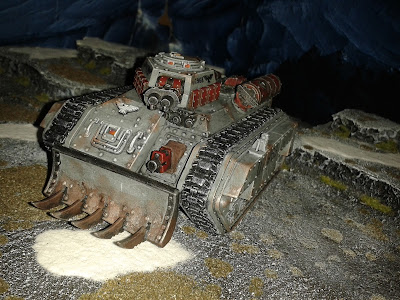 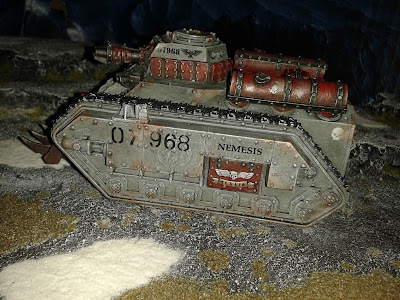 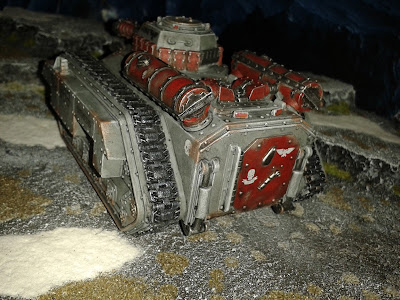 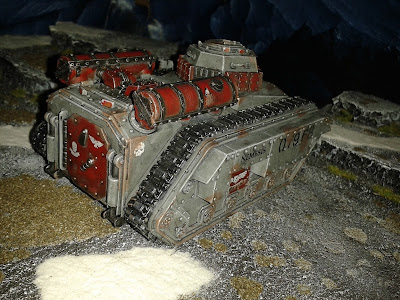 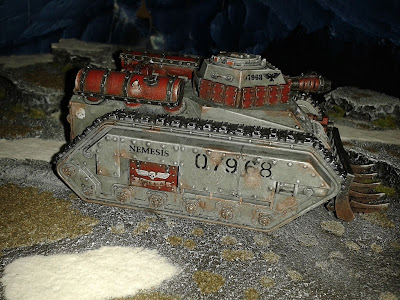 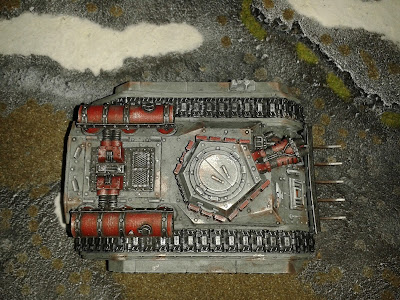 I'm really pleased with how this tank turned out. I think it looks far more "grown up" than my original paint job on it.

Completing this tank crosses off two major milestones for me:
I have now got one more tank in my army than when I started this renovation project (and three more to go, possibly more at the whim of ebay!)
All my old tanks have been repainted so there is no longer anything painted in my IG army that I'm unhappy about.

I'm approaching the end of the Hellhound refurbishment now - the decals are in place.

I've deliberately gone for more colour on the Hellhound than I did on my Chimeras to make it stand out from those models on the table. As they're both built on the same chassis the only really noticeable differences are the promethium tanks and the armour around the turret (and I don't think any of my Chimeras has the same turret as any other so I'm not counting that!)

So I've painted that turret armour, rear and side hatches and promethium tanks all in the same red that I've used uniformly throughout my army to add some flash to weapons, purely for the sake of battlefield visibility. 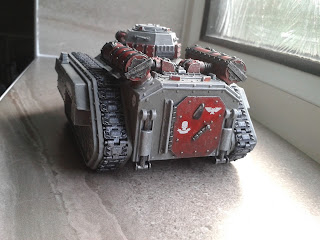 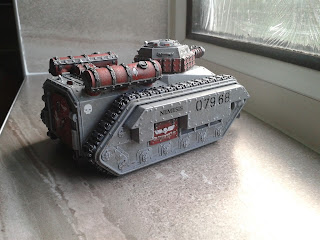 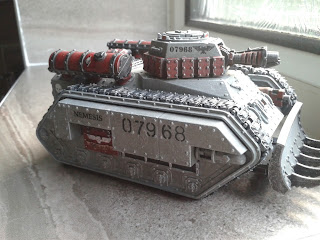 Just weathering to do now to finish it off.

Posted by Dean Kelly at Wargames Wasteland at 02:31 No comments:

Since my last update I've carried on working on detailing the tank. When I left off I'd still got the dozer blade and the Prometheum tanks & pumps to complete. I'm please to report that they are all painted now, leaving Decals, Weathering and the Oil Wash to complete the work on this model. 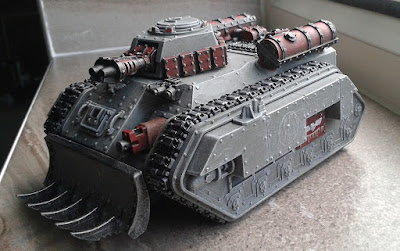 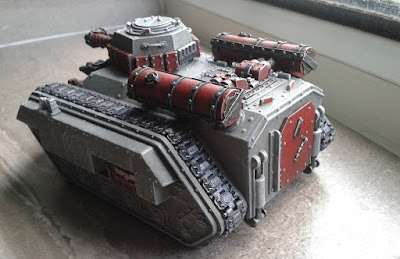 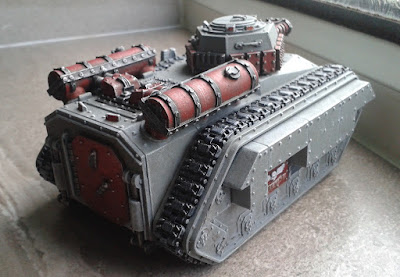