It's been a long time coming, but a modicum of work has been picked up on my Epic-scale  Ultramarine force.

I have to say I dislike the Epic bike models - I've always avoided actually painting them. I've not put a huge amount of effort into these as I simply couldn't be bothered so they've been given a basic "tabletop standard" paintjob.

All that said, one of the models is slightly different than the others: the rightmost model  on the centre base is a metal bike. Back in the day, GW used to bundle a metal model in the blister of any model you bought (buy a Titan, get a randomly selected model (might be a Marine, Bike, Thudd gun etc.) for free). 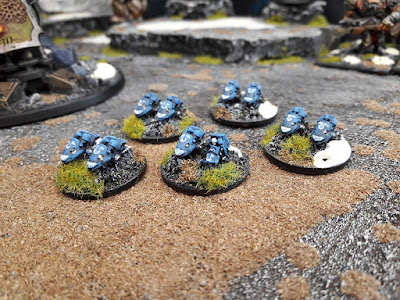 I have completed (almost - I think I'll have another go at the freehand on the banner at some point) my second Nurgle Knight! One more to go.

I have photographed these on my standard (and getting very tired now) backdrop. Some of my other recent models are visible - either ignore them or please let me know your favourite theories why these knights are fighting a battle with Mortarion (not too much of a stretch), a Death Guard Marine (again - easy peasy), some fantasy Zombies (erm - you could make that work), a Kharadron Overlord (creaking significantly) and some Vikings (Medic!).
You'll notice from the photo above that this model is missing its shield and autocannon. That's not intentional - those parts were simply missing from the model when I picked it up second hand.

The second of my Chaos Knight conversions is firmly underway. I''m not planning to churn out as many blog posts to cover this knight as I did for the previous one as it is broadly following the same pattern of work.

As such, my first post finds me firmly half-way through the work with the model based, all the green-stuff work done and painting complete on the lower-half of the model: 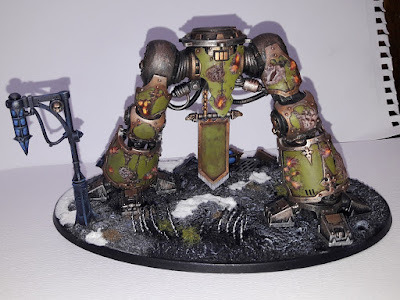 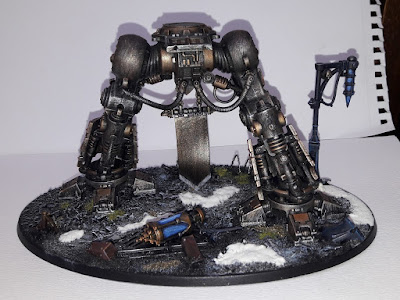 Any of you who are keen eyed may note that the waist on  this model ends in a flat surface which is not usual for a knight. There's a good reason: I bought this model second-hand (thanks again, eBay!) and had utterly failed to notice from the photos posted on the auction that the model's previous owner had (for reasons only known to him/herself) attached the upper half of the model so that it was facing backwards.

Honestly. So the model was hack-sawed in two ("Cleft in twain" for Fantasy-oriented readers :) ).

It was nicely painted, and all the modelling work on the base is as it was when I bought it so I can only assume I got it from an experienced modeller. I guess it was probably a gaffe - the mini was clearly part painted before assembly (all the detail behind the face-armour had been painted) so I think it was probably mis-assembled at the last gasp. It must have been gutting for the previous owner and is probably why it ended up on eBay.

My last post on this project was at the beginning of January. It's June now. I've completed another unit - in Saga terms that is one point. A unit of 8 Bondi (Warriors).

Anyway - here they are (Not much to show for five months, eh?): 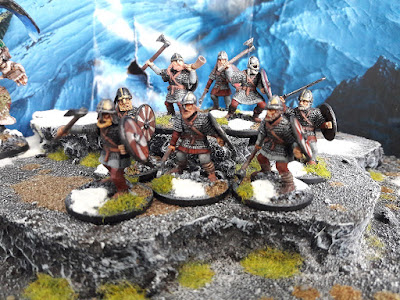 I promise it won't be five months before the next point is completed.