With my Beasts due to take to the field in a couple of days for the first time in a year I thought I'd hold myself to a promise I made when I last fielded them.

I'm perfectly comfortable painting minis, but the idea of doing banners fills my heart with mortification and dread. Flat surfaces terrify me.

So much so that in the 20+ years I've been doing this I've only painted one banner before. All other banners have just been "flat colours" waiting for me to put something on them.

I promised myself last time that my armies would not take to the field in this state again.

Now I'm no brush artist but I am trying to get the hang of using an airbrush so I thought I'd try a simple stencilled design.

I started by masking the model itself - everything above and below the banner-proper.

I then roughly tore strips of masking tape and applied one at the bottom of the banner to represent "the ground" in my little landscape. Other strips were applied starting with one, rough-edge "down" (remember these were just torn off) at the very top of the banner. This left a gap of uncovered banner about 1.5cm "tall" between the two rough edges of my tape. The next was applied overlapping the first but with the rough edge lying closer to the "ground". Another was applied over that, closer to the ground and so on until I had just a thin strip of uncovered banner.

When all that was done I stuck a new bit of tape onto my cutting mat, cut out a tree silhouette and then applied that to the model and sprayed black.

And here's the result:

It's simple, quick and looks a lot better than the red-brown rectangle that was there before, I think. I'm happy enough with it anyway.

Posted by Dean Kelly at Wargames Wasteland at 06:20 No comments:

It's finally here! The Siege is upon me!

This is an update to an earlier post. The Siege game has (finally) taken place. I won't reveal the victor as I'm planning to cover that in a full battle report in a couple of weeks time, but as we spent such a long time preparing for this game I thought I'd take a moment out to share a few photos as a taster of what's to come.


I've spent months this year preparing for this Warhammer Siege game. It's taken a (very!) long time and I have written a number of modelling/painting posts along the way. This post simply collects them all together into a simple "table of contents" format and also links out to the blog of my opponent Mike (a.k.a. The Old Giant) who has left his preparations somewhat later than mine: He started work on his 1500 point High Elf army just 9 days before the start of the game!


Here are the links to the various posts I've written whilst prepping for this:

And here are the links to Mike's posts on his preparation:


I'll update this page again soon with a link to the BattleReport when I've written it.
Posted by Dean Kelly at Wargames Wasteland at 03:12 No comments:

As a quick follow-up to a couple of posts I wrote a few weeks ago about Creating Snowy Bases and Changing my overall basing scheme, I thought I'd just post up a quick "snap" of the way my Beasts of Chaos are going using the new basing scheme.

This is just a quicky as I'll try to photograph the whole army properly when I next get them on the gaming table, so this picture just shows the way my Chaos Warhounds are now looking. 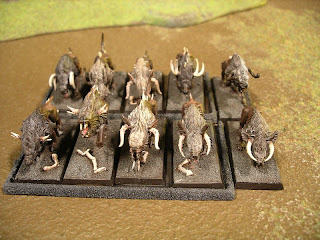 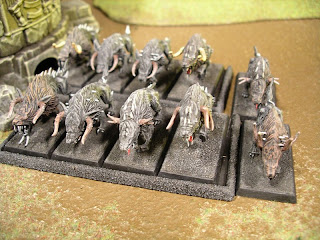 An improvement, I think. It's quite a "busy" scheme, but I like the "spring grass peeping through the melting snow" look.
Posted by Dean Kelly at Wargames Wasteland at 02:37 No comments:

This blog has just reached it's 10,000th "hit" so I wanted to take a moment to say "Thank-you" to everyone who has taken the time to visit and helped make it a success. Especially if you've visited more than once; that means I didn't completely bore you to tears the first time!

So once again - thanks. You have helped this blog achieve a level of success that has exceeded my wildest expectations.

The 10 most popular articles since creation have been:

Cheers,
Dean
Posted by Dean Kelly at Wargames Wasteland at 02:02 No comments: