Hot (well, lukewarm) on the heels of my previous Viking unit for Saga comes this motley bunch - some Levies bringing my army up to four points!

I think Gripping Beast have done a great job with these minis. Dynamic poses, great faces and so inexpensive! If I was to make any negative comment at all it would be that some variation in the clothing would be good. Maybe a bit of fur or a leather jerkin here or there. As it is every model is basically wearing the same tunic. 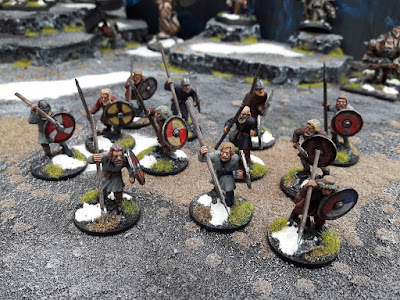 I made it to the dizzying heights of 2 points of troops! Woohoo!

Progress on the Saga Vikings has been a slow, steady affair due to my current thing for project-juggling instead of just knuckling down to complete one army. It's a very slow way of working but, if I'm honest, probably a more enjoyable one as I've not reached the point of burn-out on an army where I'm bored of looking at them.

I do go through fads where I do more than one unit for a particular force as I'm "in the groove", but then I feel guilty for ignoring something and switch tracks.

It's working for me so I'm going to stick with it for now. As such it might be a while before I get to point #3! Anyway, without further ado: Hirdmen! 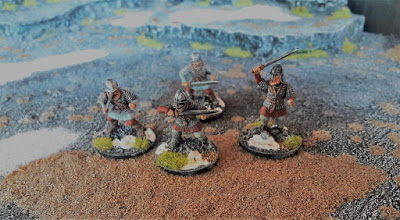 For those of you that don't get the reference, it's from an old BBC TV show called "'Allo 'Allo!" which was based around a Cafe in WWII Occupied Paris. 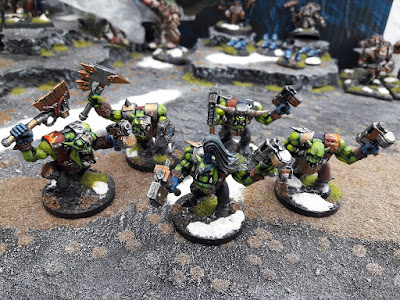 More Ork stuff:
Posted by Dean Kelly at Wargames Wasteland at 09:17 No comments:

Back to the Orks! Waaaaaggghhh!

I'm trying to cycle through a bunch of unfinished projects and the Orks came back around on the rota. So, I've painted up a couple of small units of Nobz. Here's the first one: 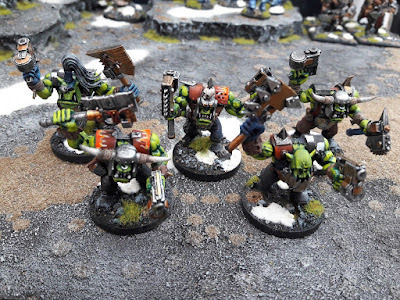 And - yes - I know. There is a mixture of Goff and Evil Sunz markings on the armour. What can I say - I like them both so I used them both.

I intend these guys to be used as Evil Sunz, but by the same token the checkers are so iconic I don't want a checker-free army *and* I also have an old Ghazgkull model I'll be using too. If this offends anyone's sens of "fluff" I will say:


More Ork stuff:
Posted by Dean Kelly at Wargames Wasteland at 06:14 No comments: