This was bought as a junk lot from ebay as a regular landspeeder without looking at the photo too closely.

When it arrived in the post I was both surprised and disappointed.

The doors were missing. So was the bumper/fender arrangement that normally surrounds the front of the model. No weapons either.

However, there was a good reason the bumper/fender was missing! The previous owner has extended the nose of the 'plane and elongated it. He/she also added a nifty canopy over the pilot! Neato!

So I added a magnet (like on my other 'speeders) so I can swap weapons around. One problem solved.

I picked up some weapon pods from a bitz store to sit in place of the missing doors. Problem two solved, plus it also made the 'speeder typhoon look different than a regular speeder. Bonus.

The canopy made painting it a little tricky as I had to disassemble it in order to paint it and then rebuild it afterwards. 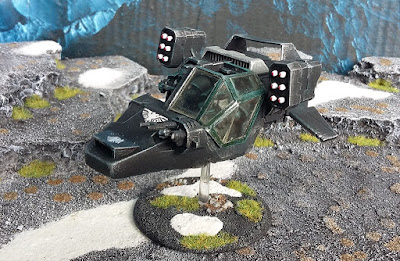 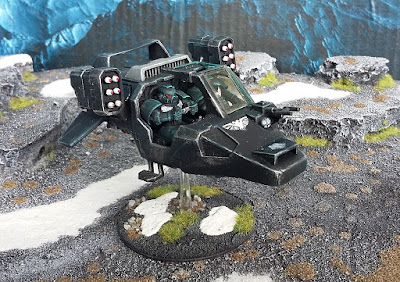 All good fun and well worth the effort.

Here we are again with another mix'n'match unit - this time Terminators from various eras. 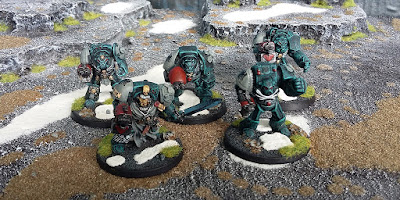 Three of these are metal models from a while back (the two on the left and the one rear-right).

The one in the center of the photo is an old model from the original Space Hulk/Deathwing game equipped with a heavy flamer. History? Yes, but let's go back further...

Check out the guy front-right: a casting of the first ever attempt GW made at issuing Terminators! Very different, I trust you will agree. The Terminator Honours on the left shoulder has been added by me (greenstuff).

Landspeeders - gotta love 'em (well, apart from the Landspeeder Vengeance which hase basically got parapets on - ridiculous and the aerodynamics are clearly shot).

Anyway, I bought these as junk lots from ebay and applied a lot of time, knife-work and some plasticard in places (like the spoiler on the leading model in the photo below which was completely missing) to get them up to snuff.

I think they turned out OK. 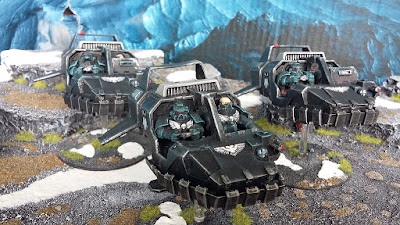 Posted by Dean Kelly at Wargames Wasteland at 05:06 No comments:

This time a squad of bikers - the bike squads are among my favourite models I think. They epitomise the highly maneuverable nature of the Space Marines in my mind.

Plus I think they look cacking hard!

It occurred to me that I haven't actually posted any troops yet! It's all been armour so far. 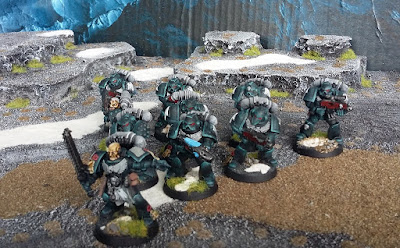 All sorts of stuff going on here - there are metal marines and a plastic marine from back in the Rogue Trader era, Marines from the AoBR boxed set and the chap with the plasma gun is actually carrying an Ork plasma gun from the first Space Ork plastic boxed set.

Actually it's a Chimera.

Look again. A Chimera (not the tank, the mythical creature) is a hybrid of two other creatures. Well, so is my Land Raider.

The main tank is an original Rogue Trader model but - as those of you with long memories will know - the lascannons on that old model were prone to snapping off.

So I picked up a weapons sprue from the newer marque of the model and did some chopping and changing, added some foamboard moved some hatches and ended up with this bad boy.

It's wider than it is long. Enough said. 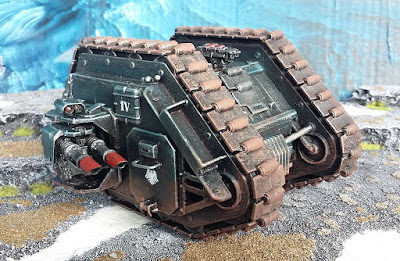