Time to turn my attention to my Hellhound, I think.Before renovation, it looked like this: 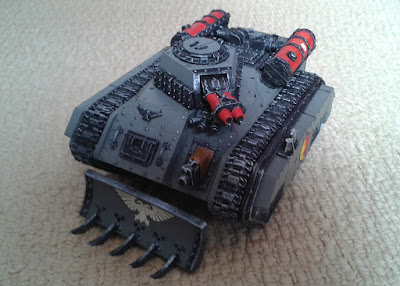 Broadly speaking I'm keeping the same basic colour scheme but the plan is to "beat it up" a bit so it looks weathered rather than the very childish "everything is just flat colours" that it is as shown above.

So I'm following the same process as in my other recent posts: 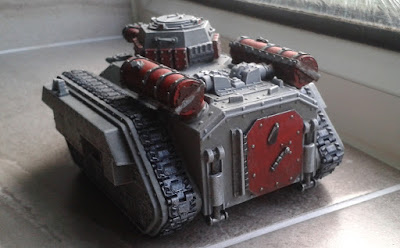 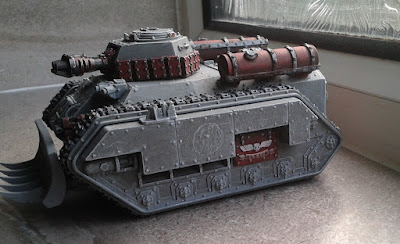 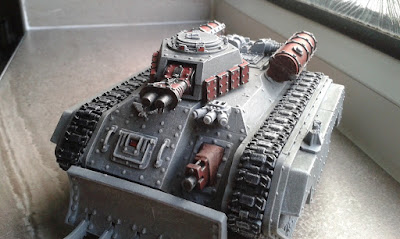 This tank will take me to a landmark stage - when completed I will have more tanks in my army that are finished to a standard that I'm happy with than I simply had "tanks in my army" before I started this renovation project off. It's the first time that my Imperial Guard army has actually expanded in size since I painted my Valkyrie last year. I have three more tanks to go to finish it off after this one is complete and then I can get back to my Tau army (which I've been woefully sidetracked from!).

I've completed work on my first two Chimeras and I'm very, very pleased with the result.

I used to hate my IG tanks and almost hated the idea of repainting them as much as I hated the models themselves, but I have to say as I've learned to streamline my work and time projects to pick them up "when I want to do them" rather than "when my guilt drives me into doing something I'm not really up for" I'm working faster and getting more enjoyment out of it.

Anyway - here they are, with all the weathering and oil-washes in place: 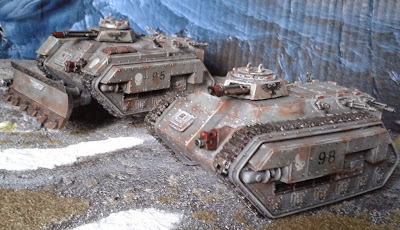 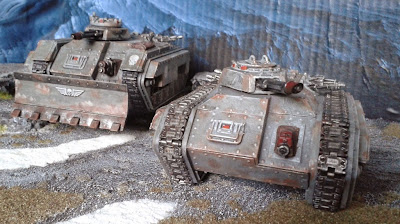 Here's just the first Chimera from a couple of angles: 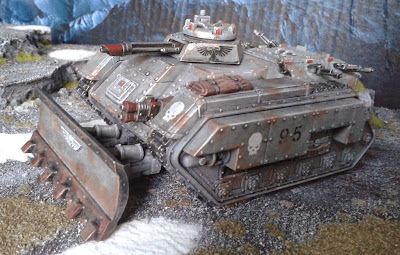 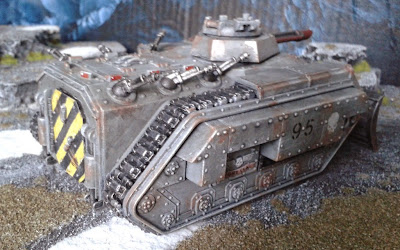 And here's the second:


I have two more Chimeras to do but before I turn my attention to them I'm going to repaint my Hellhound. Watch this space.

I've done the penultimate step on my work on my first two Chimeras and added the decals: 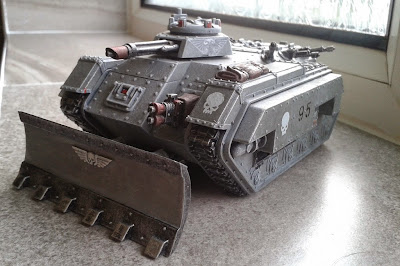 Whilst adding the decals a few things occurred:
A multi-laser muzzle fell off (reglued),
A (proper GW; not one of my home-made) side armour panel fell off (reglued),
The penny finally dropped about what all the little protruding rectangles are around the lasguns by the oblong hatch on the hull! They're viewport-thingies so the guys shooting the lasguns can see to aim! I'd always wondered how they did that. I'll add some lens-ey paint to them before I get to the next step...

Posted by Dean Kelly at Wargames Wasteland at 15:27 No comments:

Nearly there with the Chimeras.

The last few details have been added. All that's required now are decals and weathering. 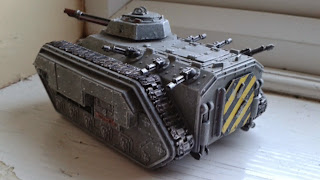 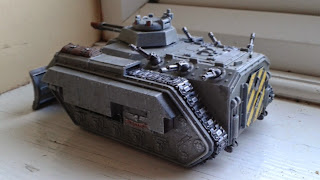 All the metallic bits have been blacked and drybrushed with chainmail, the Weapon housings and muzzles given their dark-red colour to match the rest of the army and the lenses painted on the turret 'scopes. I've painted the leather cowls over the hull-mounted weapons and and deaths-head/aquila thingy on the dozer-blade. Oh, the tarpaulin has been done too. 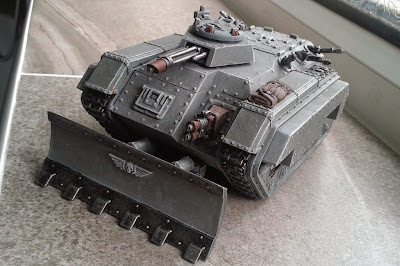 There is more detail I want to do - I want to do some hazard-markings on the rear hatches and the icon-heavy hatches on both sides need doing. I need to black-out the gun-barrels too then get decals/weathering etc. done.

I decided to paint my Chimeras in two pairs rather than all four at once, following the same process I've used on my other Imperial Guard tanks.

So I began by masking the tracks (as they're already mostly painted) and spraying the models with a flat grey rattlecan primer. I then randomly slopped on a slightly darker grey as done before:

Following that, a heavy white drybrushing. As one of the two models has its side armour constructed from foamboard, that left it looking a little flat so I added some "trompe l'oeil" rivets (a small spot of black paint followed by a small spot of white positioned just above it:

Next I will "black" all the rest of the metallic bits (guns, etc) before a chainmail drybrushing will go on.

Now the Leman Russes are done it's time to turn my attention to my Chimeras.

I recently doubled the Chimera count by picking up two more tanks from ebay. I knew when I bought them that they were both missing turrets. I had a spare in my bits box and was prepared to pick another up. What I hadn't realised simply due to not examining the photo clearly enough was that they were both also missing all of their side armour.

As my intention in buying from ebay was to bolster my force on the cheap, I decided that rather than buy bits from a bitz company I'd make them from paperhammer templates. 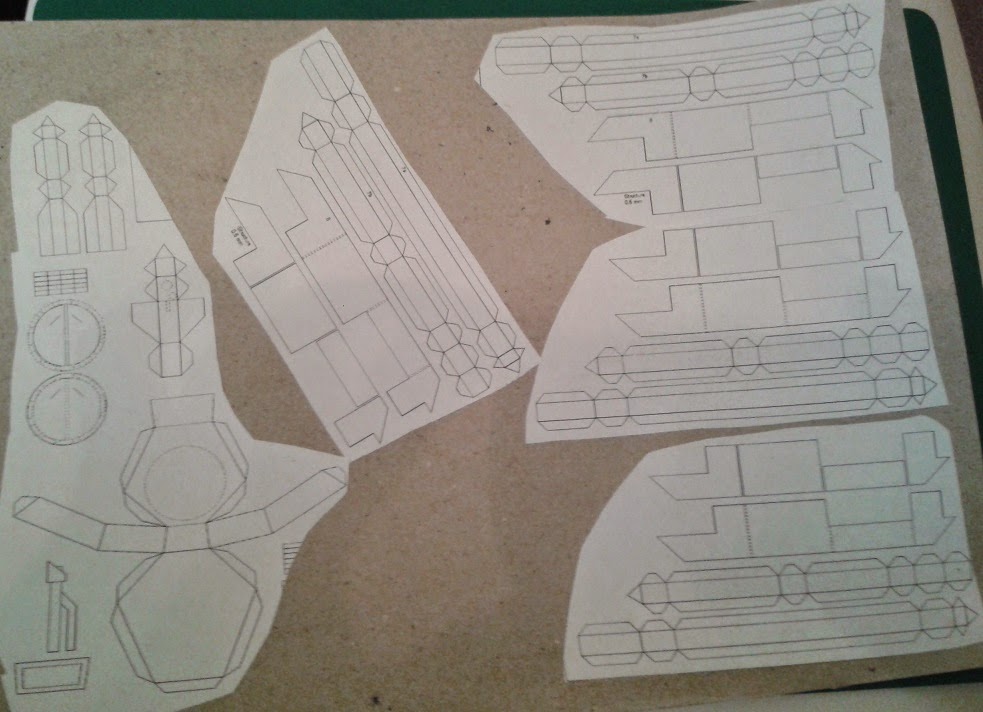 The side armour was far easier to do than the turret - I simply used some foamcore which is pretty much the correct thickness, glued the paper template to it and cut it out. Then I edged it with card cut using the template and hot-glued it in place. 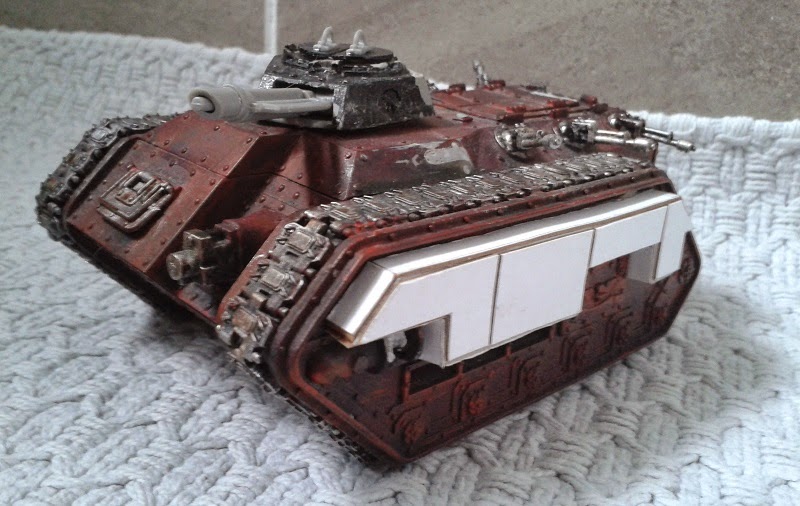 The turret was far more difficult - I tried three different card types and had problems with them all. 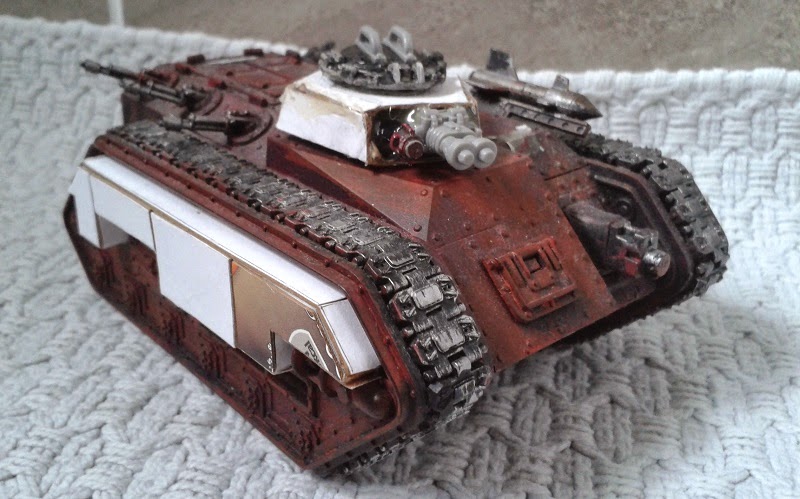 Basically after scoring and folding they would start to break and the fibres would fray. I settled on the one that worked best but I'm not totally happy with it. For strength I filled it with hot-glue which I also used to hold the heavy flamer in place.

Can't wait to get these painted, but as I plan to begin by rattle-can basecoating as I did with my Leman Russes I need to wait for a break in some awful weather we're having here...

Posted by Dean Kelly at Wargames Wasteland at 01:46 No comments: