For my last update before Christmas I've completed work on my first unit of Anglo-Saxon Warriors.

I'm going to have a short break before staring work on my next unit (some Levies) so until my next post I'd like to wish all of you that celebrate at this time of year happiness and peace (apart from on the table-top, which should be running with the imaginary blood of your enemies!!). 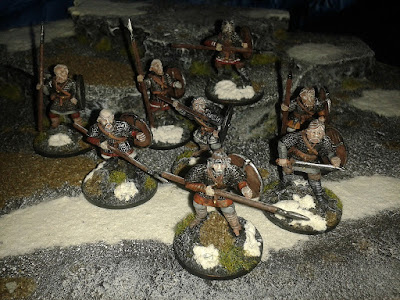 I've done a bit more work on the Warriors unit - I've highlighted the leatherwork put a base colour on the flesh parts and started adding some colour so some of the fabric: 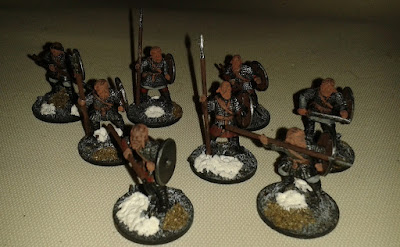 I'll finish off the fabric before I tackle the flesh-proper, I think.

Back to the foot troops!


So I'm tackling my biggest Saga unit to date - 8 models!


This is one of the things I like about this game - units are generally very small. Your entire force for a 6-point army (which is considered "large") can be as small as just 25 models. Brilliant.


Anyway - some Anglo-Saxon Warriors are being worked on at the moment. For these fellows I've used the same models as I used for my first Hearthguard infantry unit, but I've used un-helmeted heads from the sprues I've built my Levies from (which I will be working on next).


At this stage, they're just sprayed black, drybrushed in a metallic colour and have had a first layer of dark brown added to the wood and leather parts (and a couple of heads). 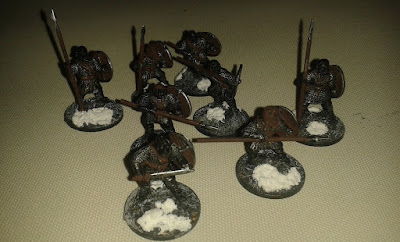 The dislike has abated. Somewhat.

I've finished these guys now to a standard I'm happy enough with. As often happens when I bumble my way to the end of a paintjob I find myself liking the end result more than I thought I would. But only a bit :-)

I'll cheer myself up with a unit of Warriors next. 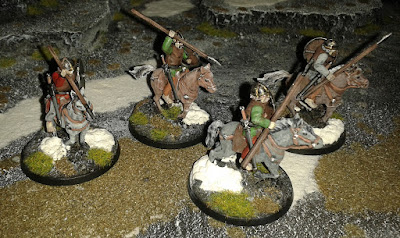 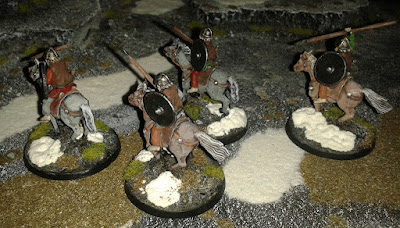