Another unit ready to fight for "The greater good" (with the exception that they have no drones yet) - my Piranhas: 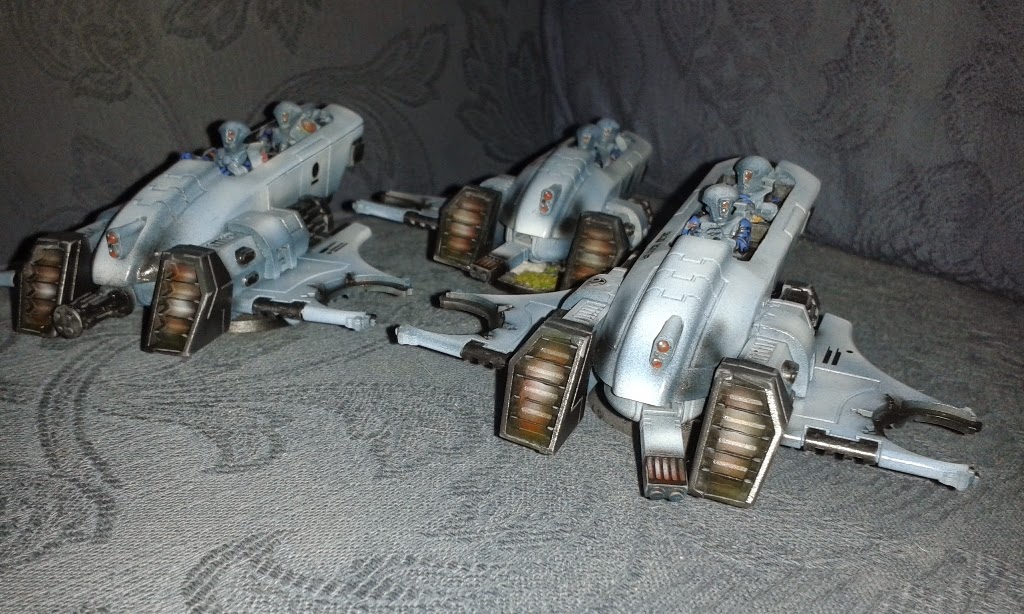 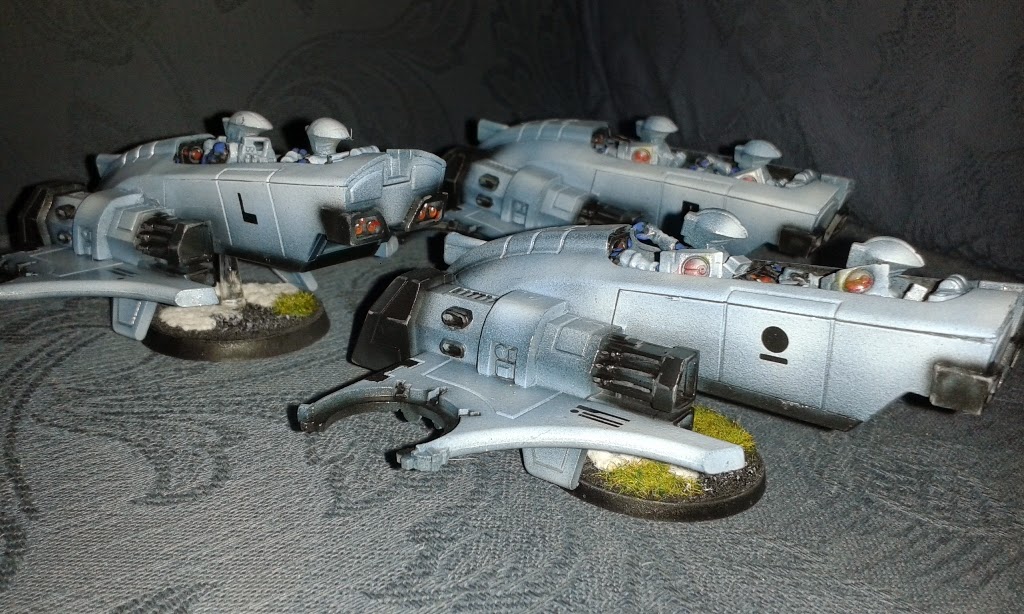 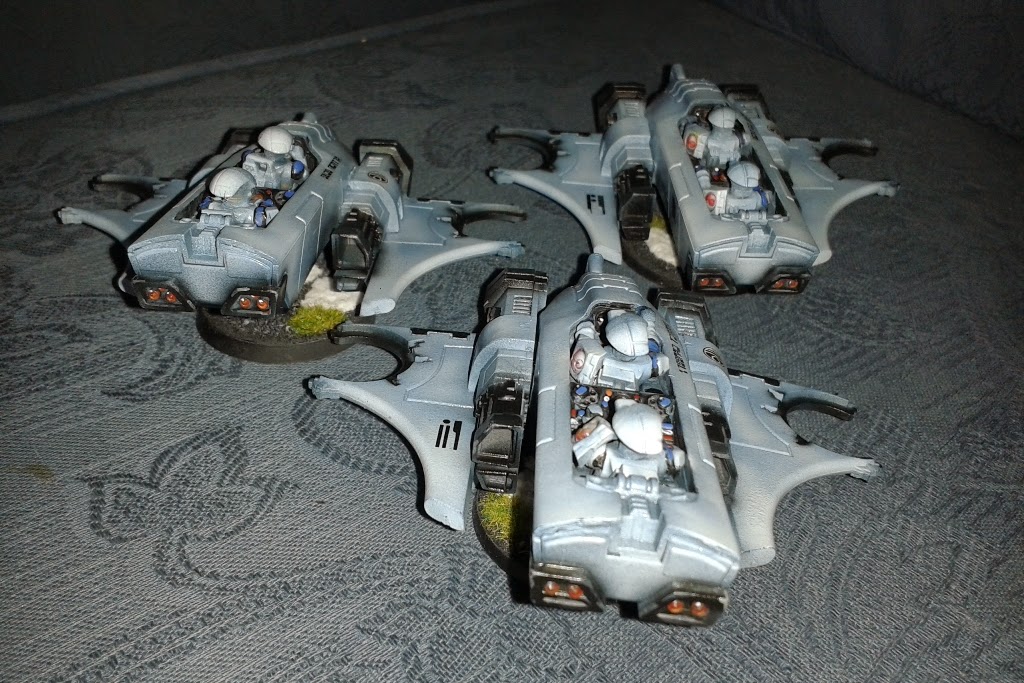 This is the first unit that I've completed that shows the Fire Warriors with the shoulder pads that I painted oh-so-long-ago.

You'll notice that in one of the models the pilots don't have shoulder pads - that's because (like a lot of my stuff) these are other people's junk bought from ebay for pennies and refurbished and that model didn't come with pilots so these are some leftover Fire Warriors from the spares box. I'd run out of shoulder pads ;-)

More Tau-related stuff:
Posted by Dean Kelly at Wargames Wasteland at 01:04 No comments:

And here is the finished Riptide.

I've magnetized the model so the main weapon and support systems can be swapped out. You can see the main weapon swapped in and out in the photos below. There are a couple of widgets that go on the weapon - I've left

I've not painted the smaller weapons and support systems yet (they'll get done alongside the XV-8 battlesuits as they're all the same parts and the XV-8's will be magnetized too).

Very happy with this chappy. On to the next job: Piranhas! 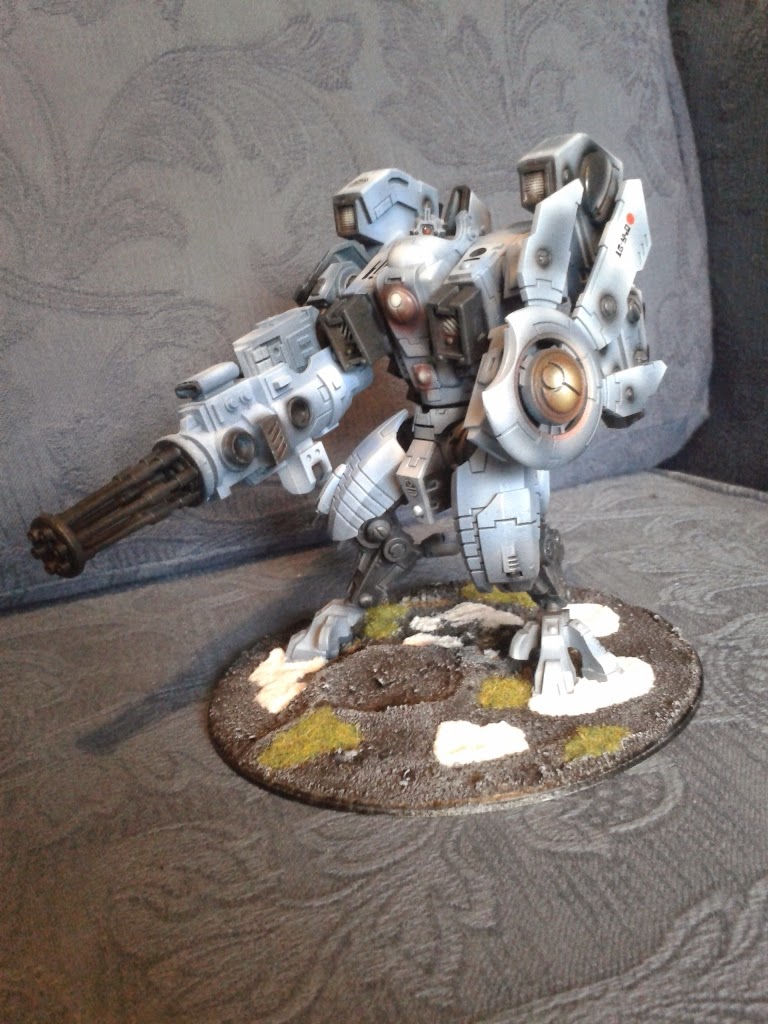 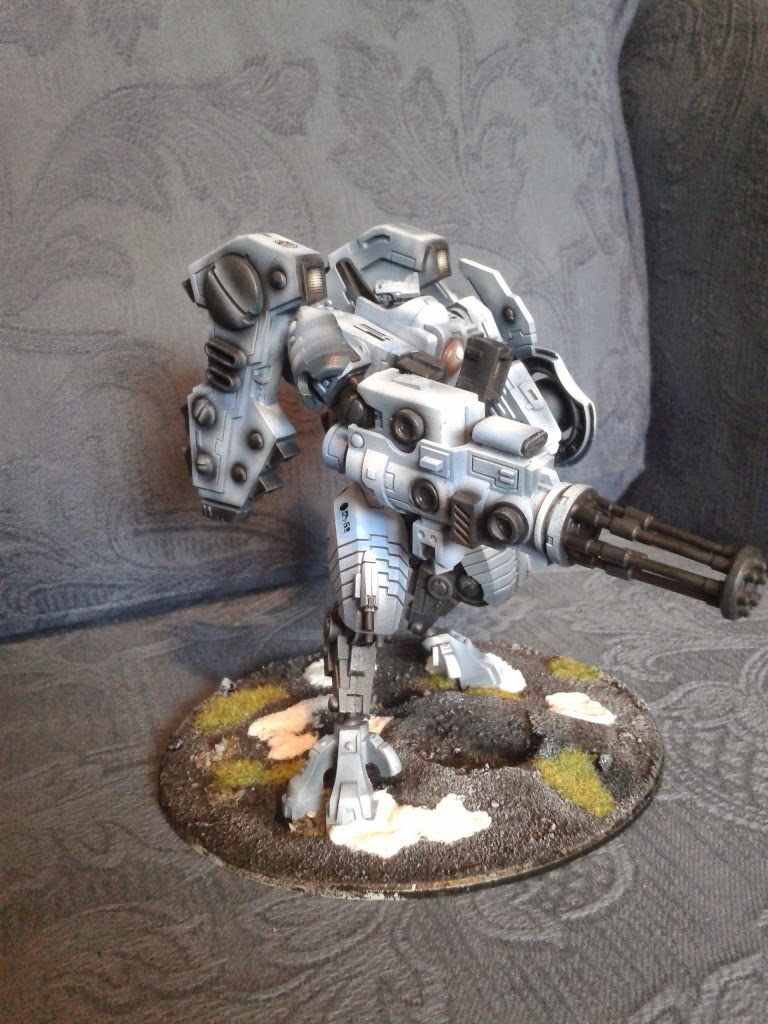 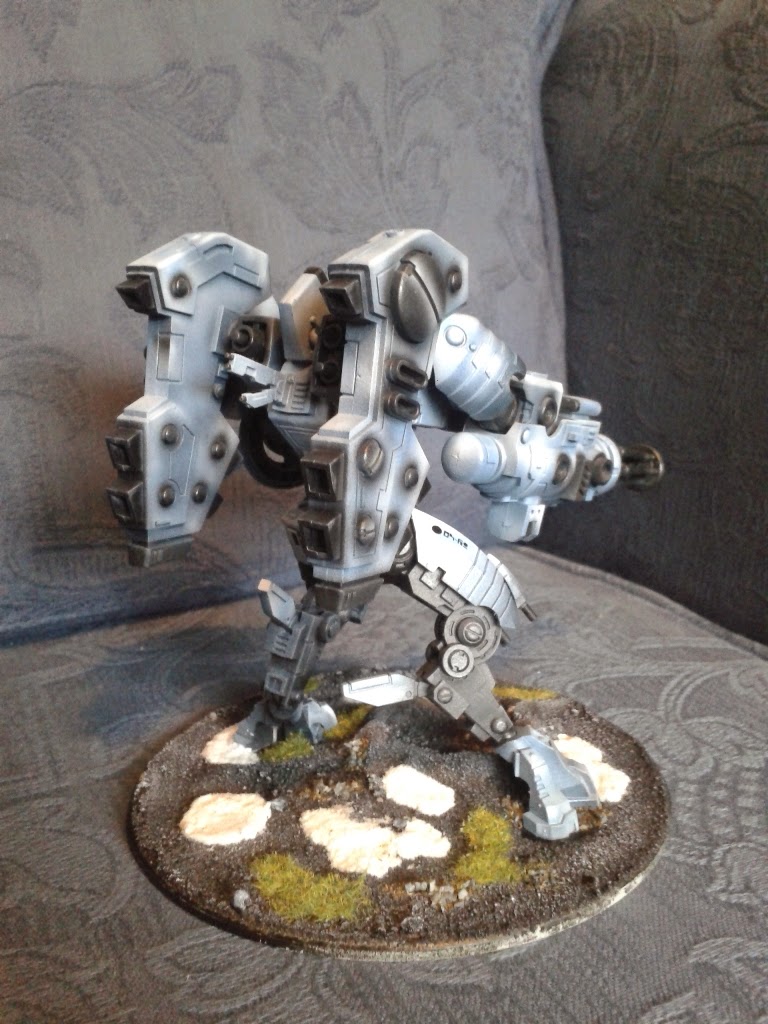 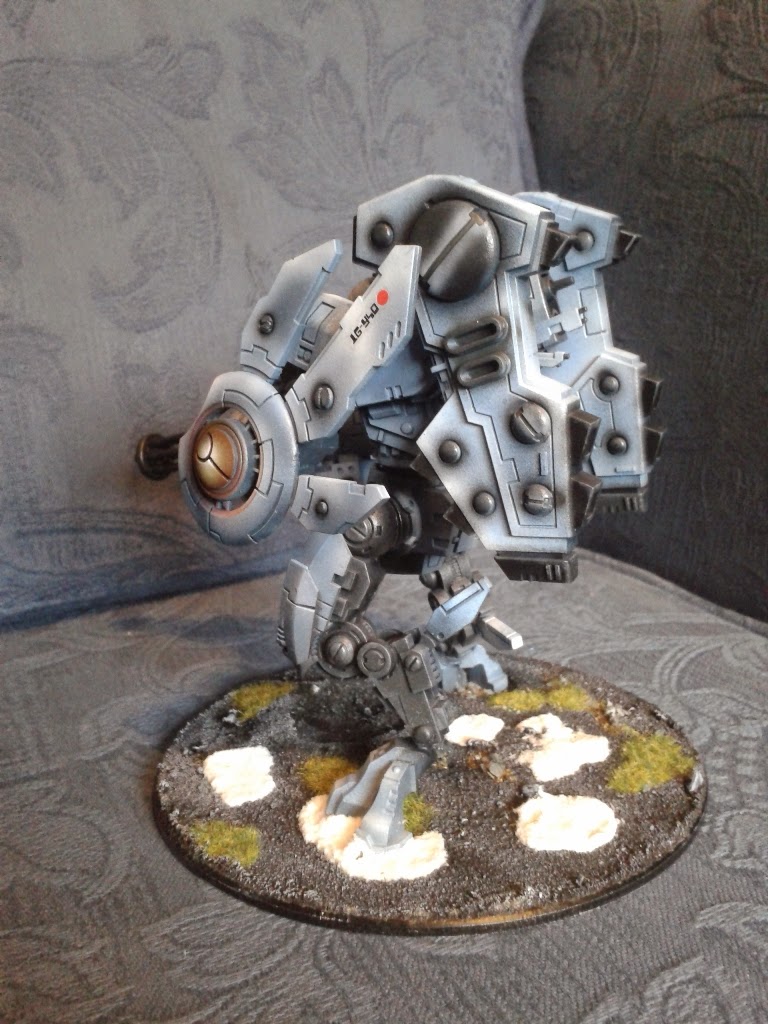 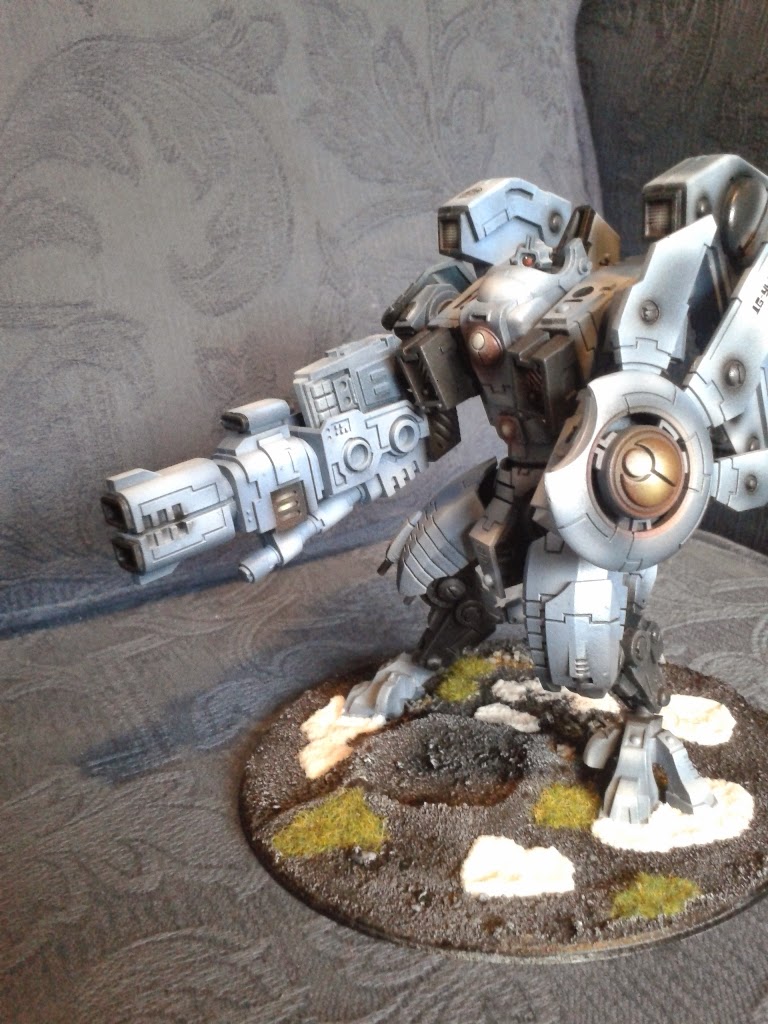 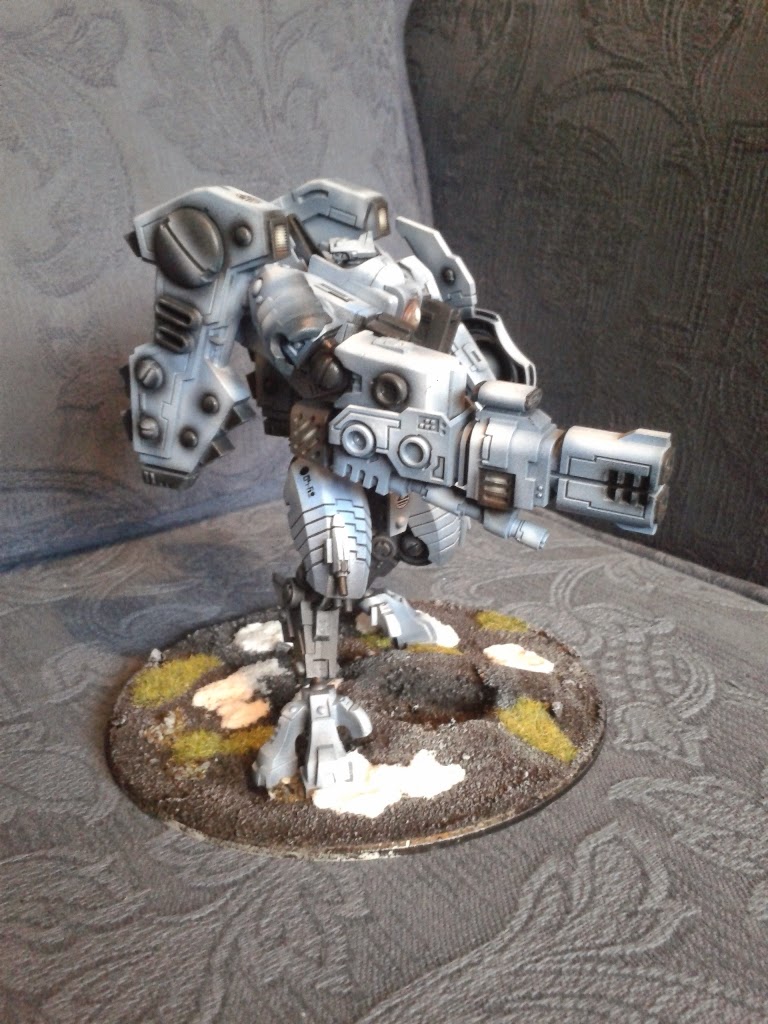 Other Tau-related stuff:
Posted by Dean Kelly at Wargames Wasteland at 08:58 No comments:

Mr. Riptide now has a base, a head and some (attempted) glowing bits. I've also added some highlights on some of the larger features on the jump-pack engines (which still need a bit of tidying up). 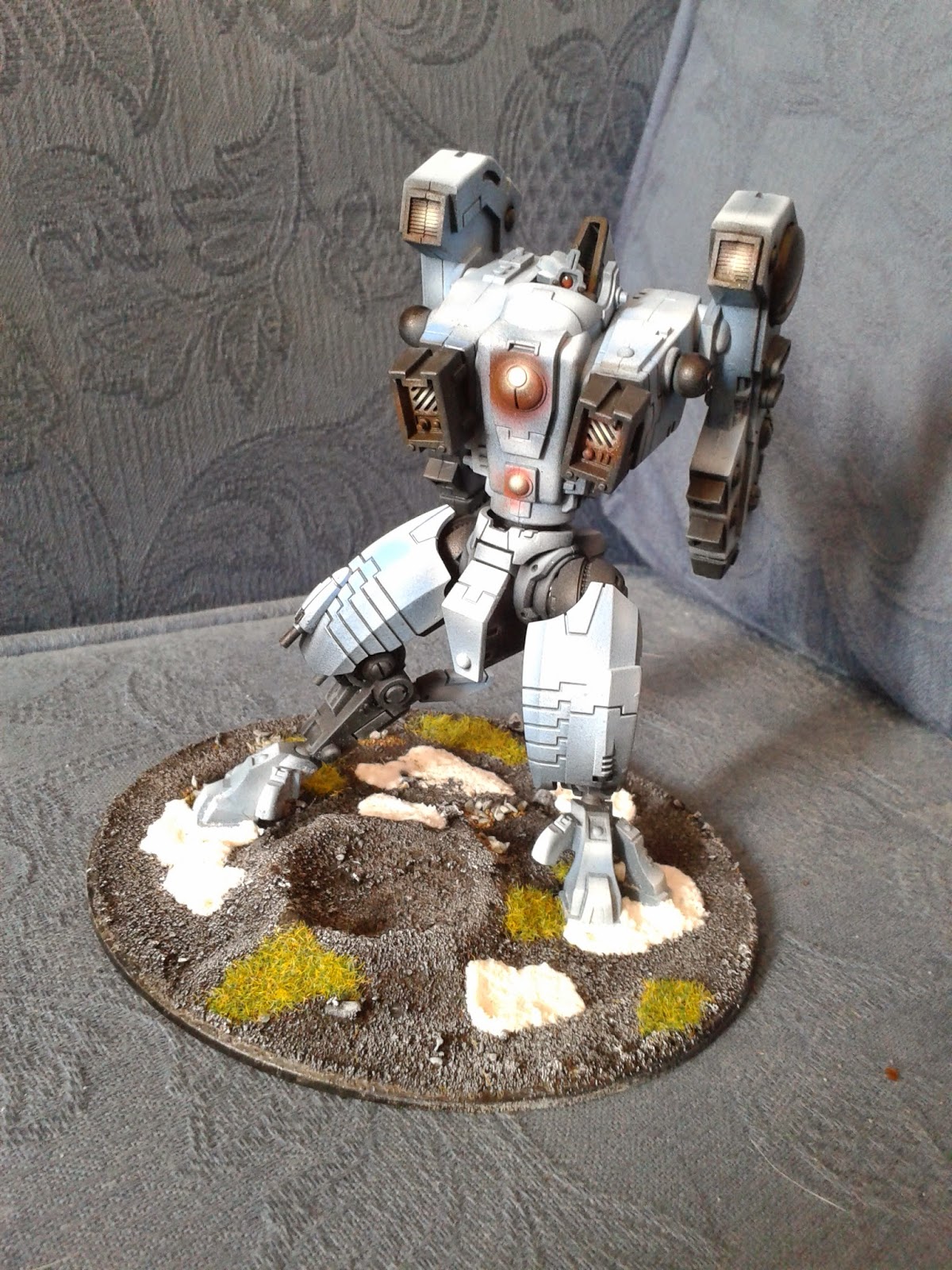 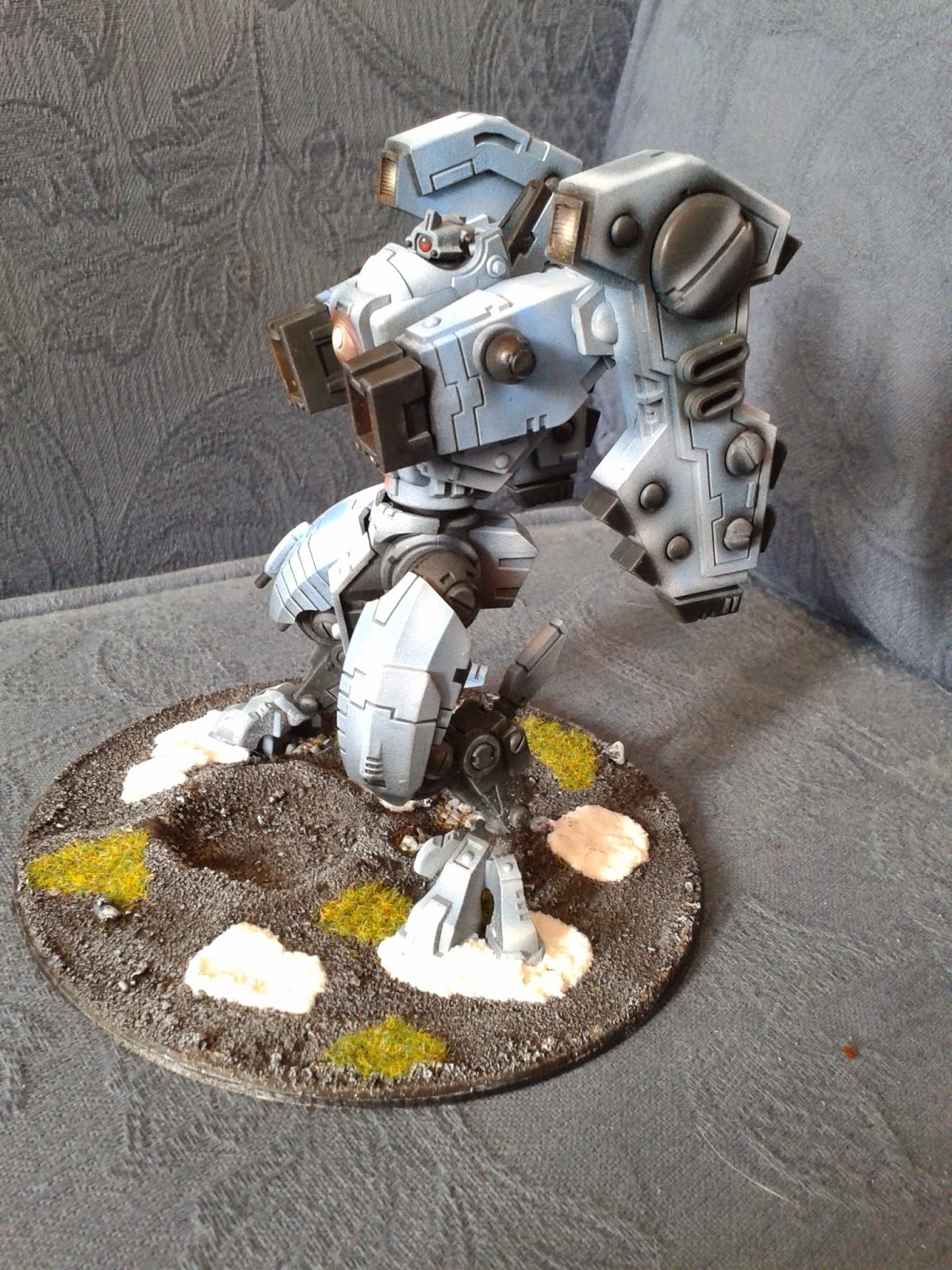 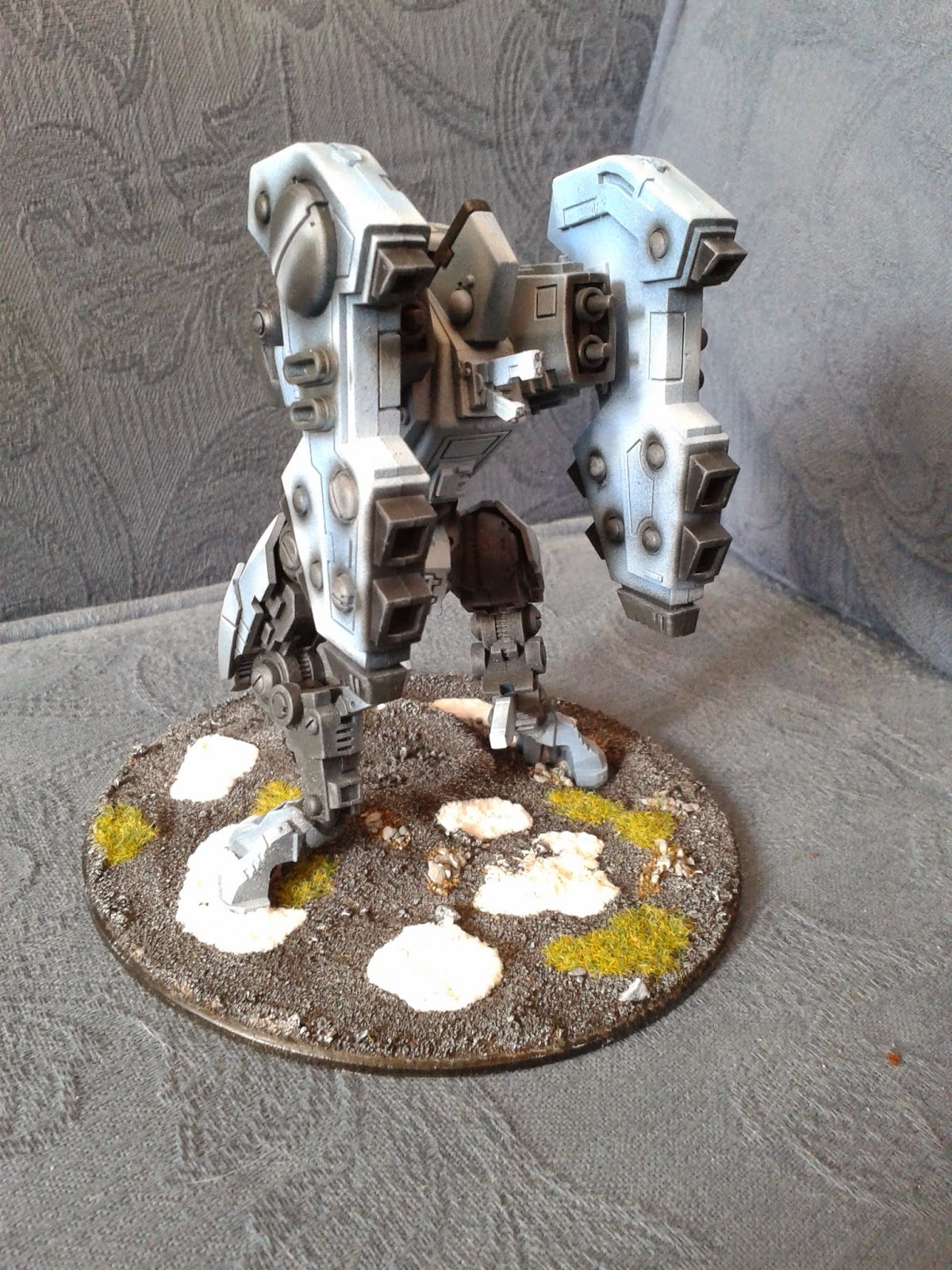 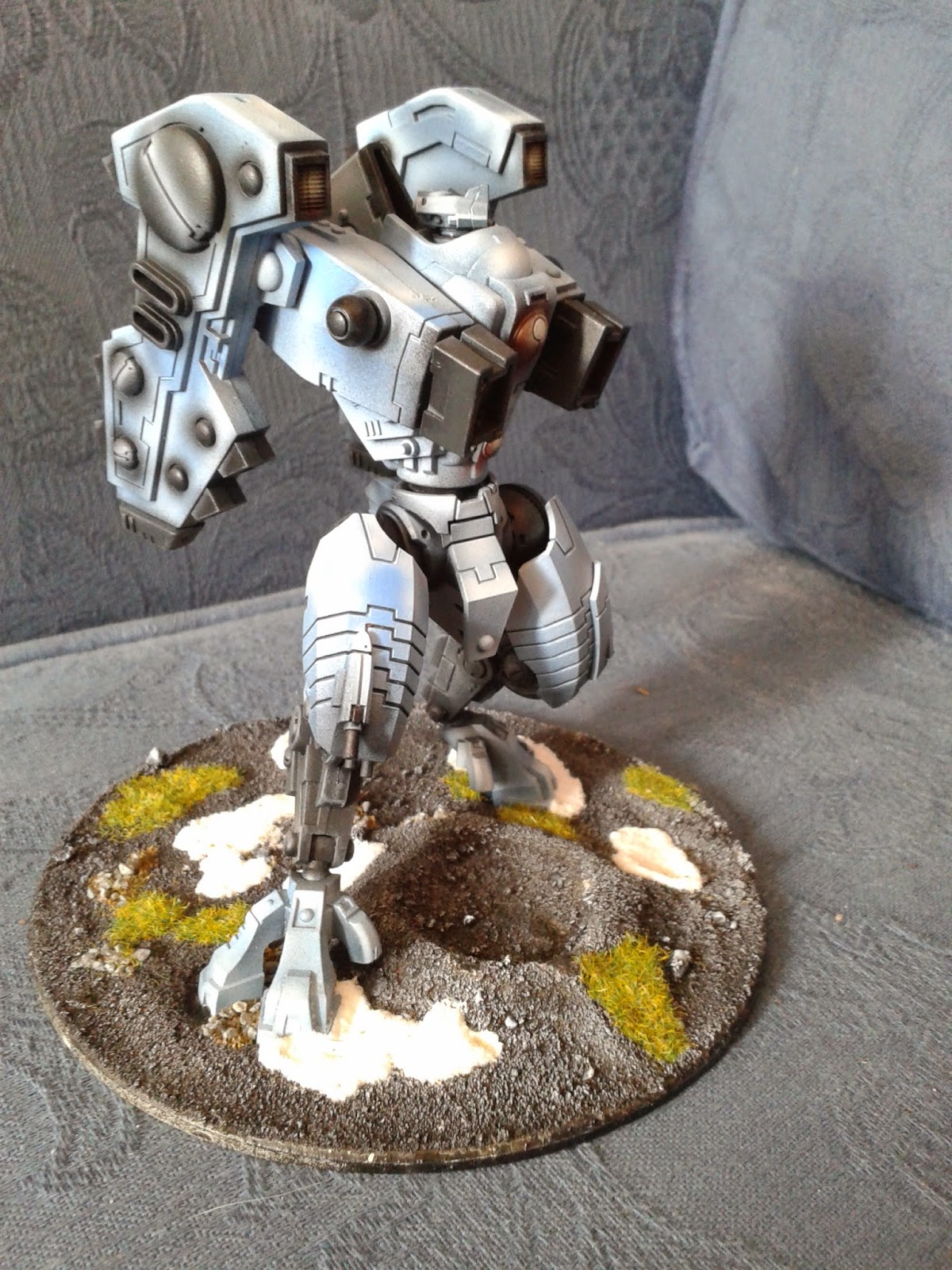 Still to do: arms, weapons (magnetised for swappability), nova shield and decals. Minor adjustments here and there.

I'm also planning to add some detail to the base - a shot-down drone, I think.

On the home straight.

Other Tau-related stuff:
Posted by Dean Kelly at Wargames Wasteland at 04:37 No comments:

He's coming along nicely. Still needs basing, arms, weapon, shield and a head, but I'm getting there. 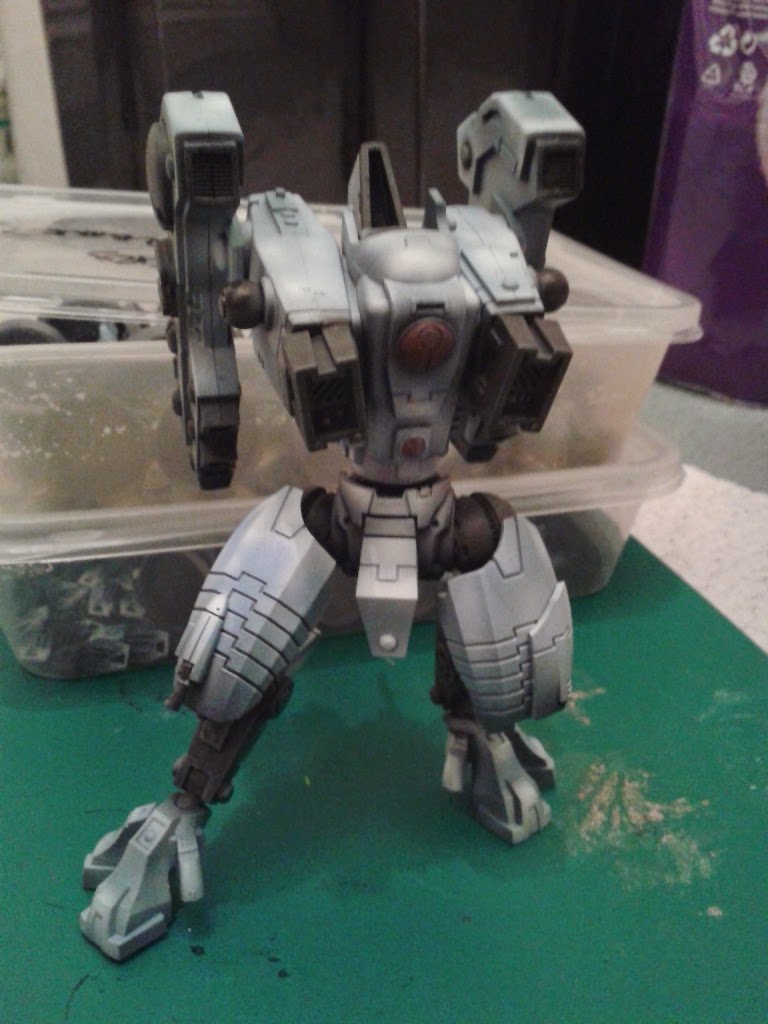 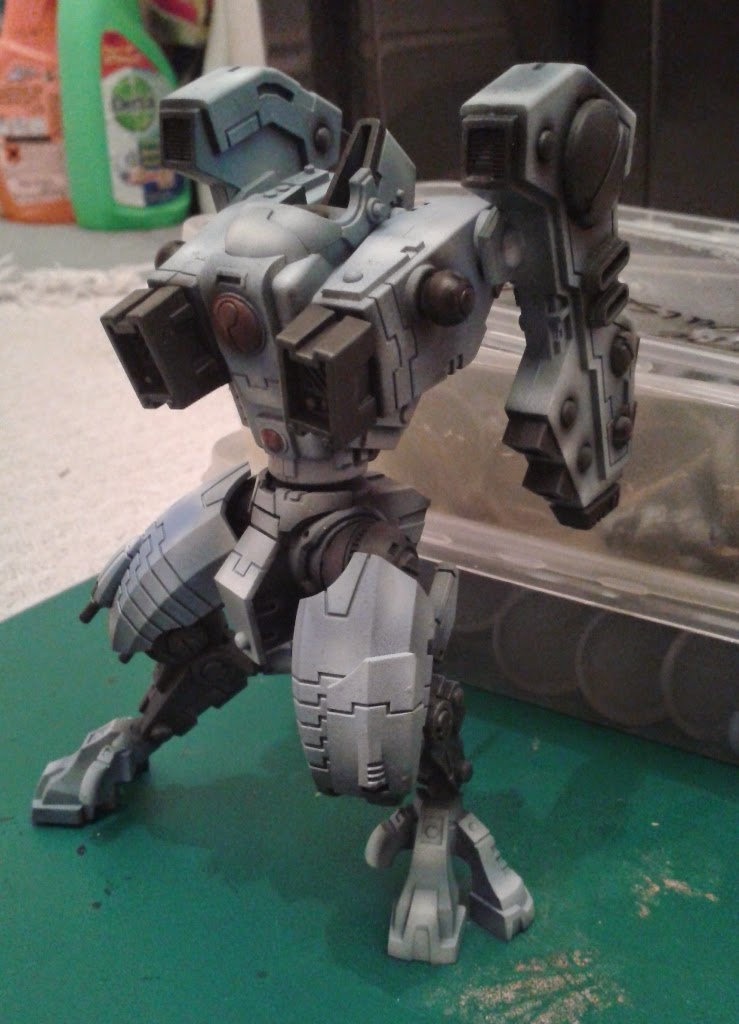 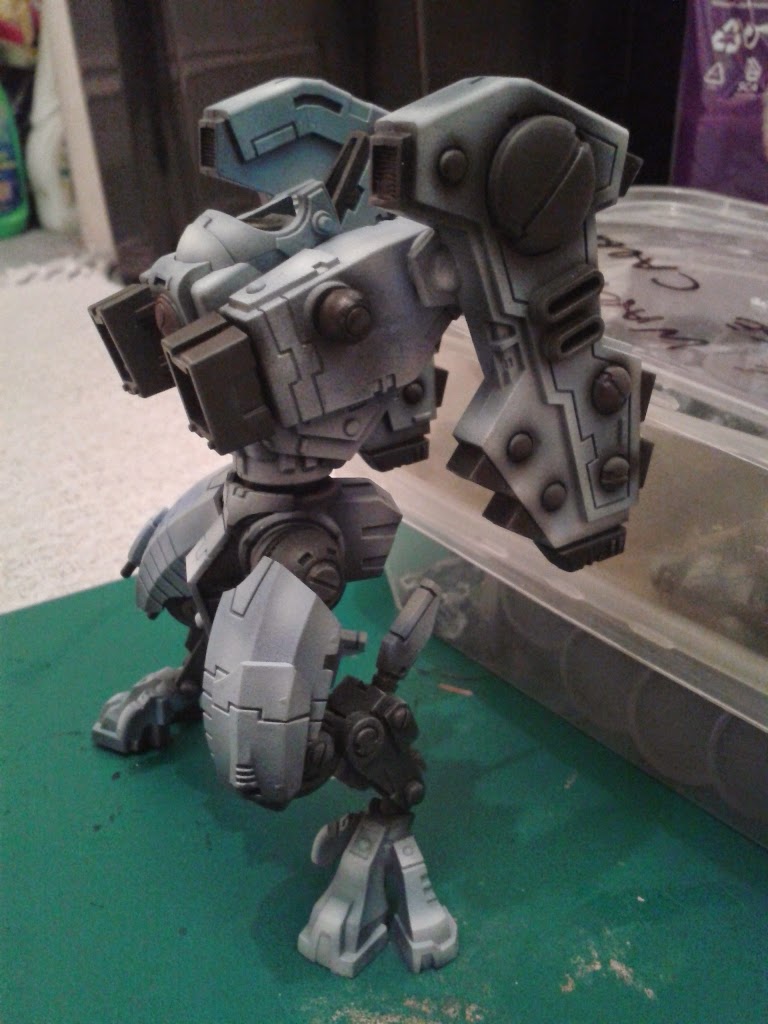 More Tau-related stuff:
Posted by Dean Kelly at Wargames Wasteland at 08:50 No comments:

So on to the next part of the Tau army.

I'm gaining more confidence with the airbrush with everything I do and am determined to make extensive use of it in this project. I've started work on assembly and painting of the Riptide model - I've built it in sections that I can try and paint without too much overspray so I can keep the lines neat where possible.

I started off by building the Riptide's legs (feet, calves & thighs) as two separate items, the hips were built separately, as were the armour plates on the thighs (only one shown here).

The black parts of the legs were a bit of a challenge - I sprayed them black (easy enough) and then needed to work out a way of doing some highlights. I started off applying a blue colour to match with the blue cloth highlights on my Fire Warriors, but I didn't like the effect so painted them black again and then highlighted in a Vallejo dark grey colour before dusting with white.

They were then given a very light drybrushing with a mid-grey colour to pick up some edges.

I'm not done with these legs yet - I want to do more with the rounded disks with the slots in. 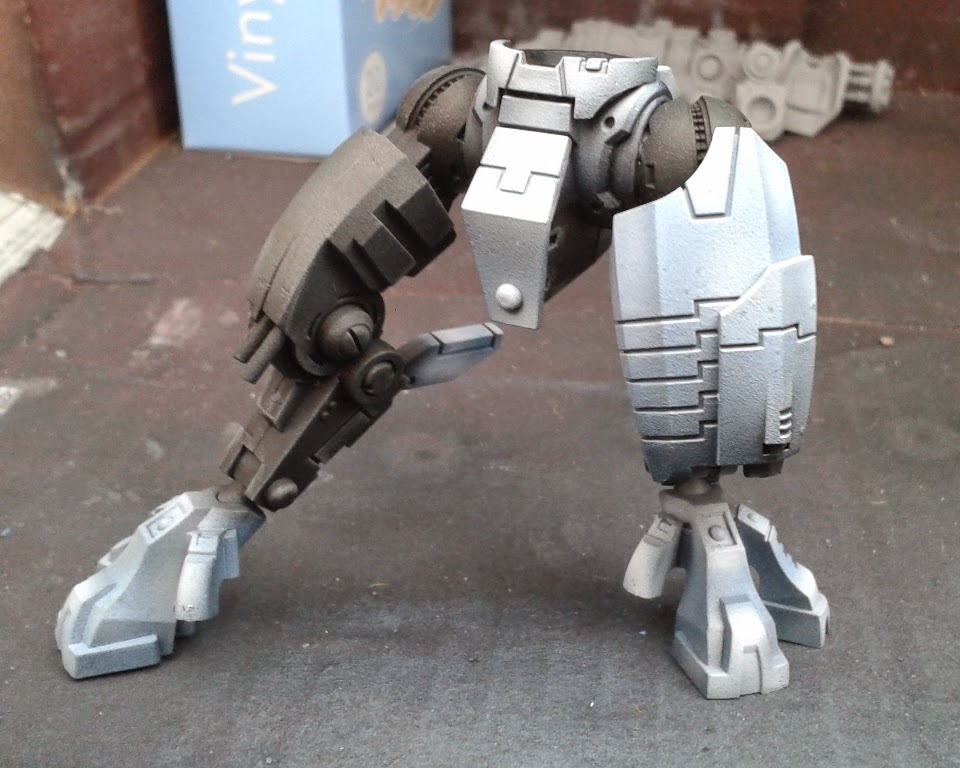 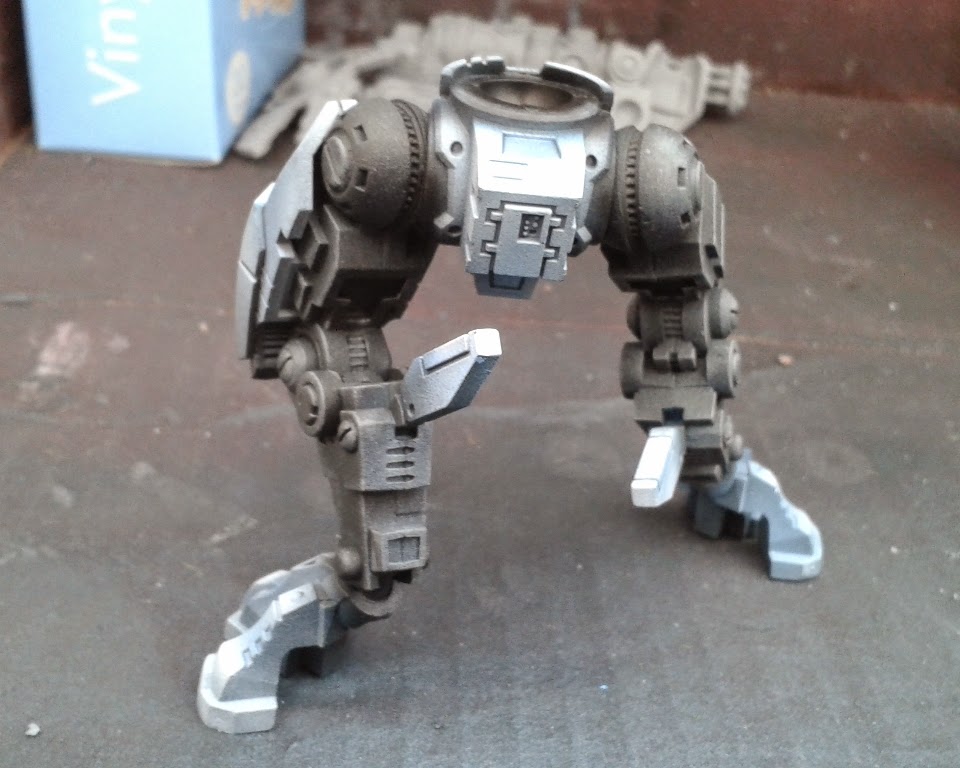 More Tau-related stuff:
Posted by Dean Kelly at Wargames Wasteland at 04:52 No comments:

My plan according to my "mission statement" was to attempt a digital camo pattern on my vehicles.

In one sense I completed that mission in as much as I attempted it. In another sense I failed miserably as the end result was shocking. Utterly horrible. A combination of poor stencilling/masking and a poor choice of colours caused an abject failure.

I did go some way towards proving it could be done, but the process was so painstakingly slow on these three Tetras that the thought of applying it to them again, then moving on to three Piranhas and five Devilfish/Hammerhead/Skyrays and 30-odd Drones was just too daunting to face.

So I took a step back and simply applied the same techniques I'd used on my Pathfinders and totally fell in love with the results. I think these are probably the best W40K vehicles I've done so far. 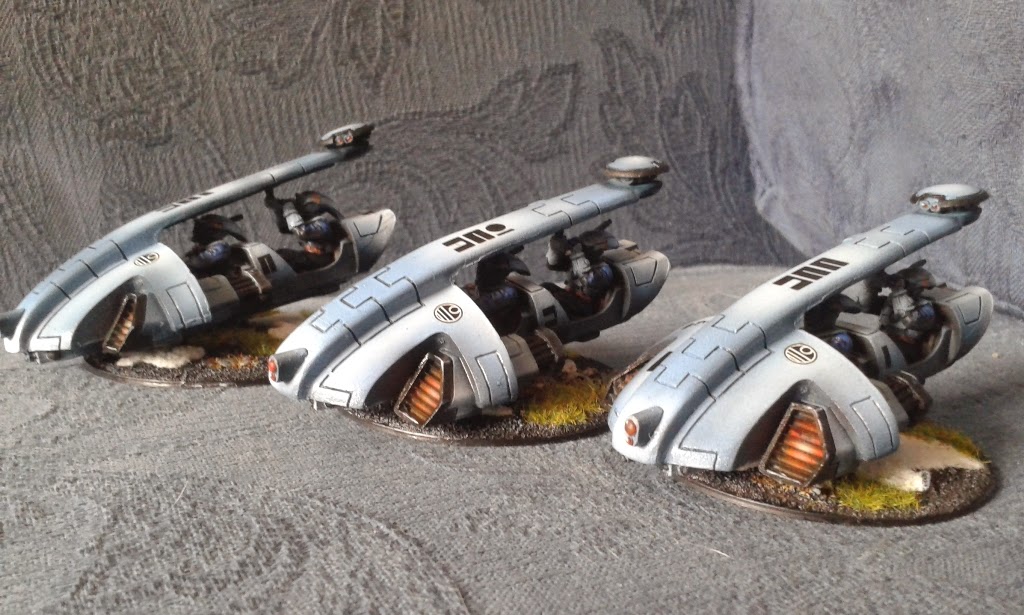 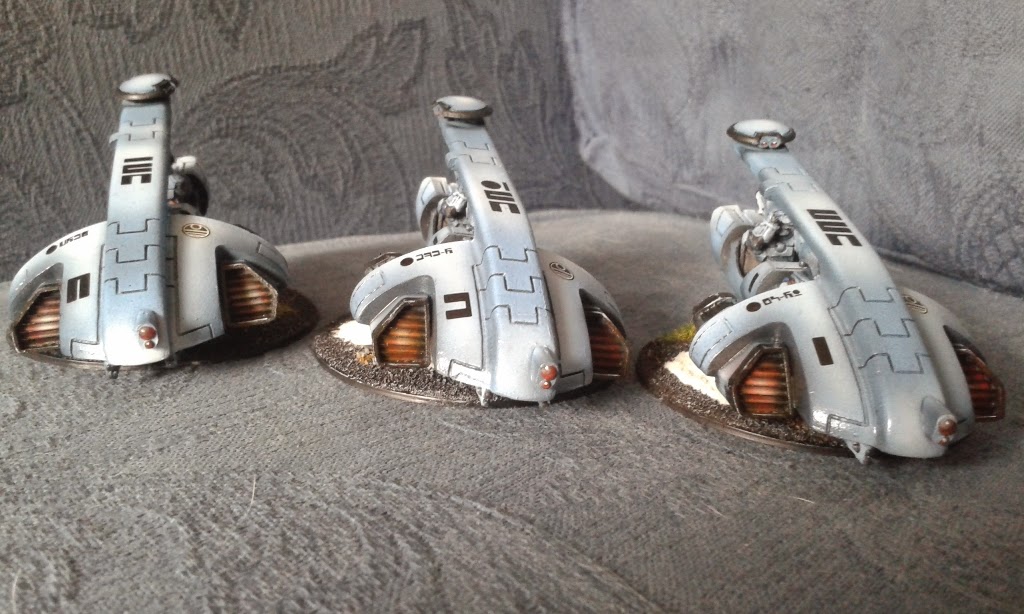 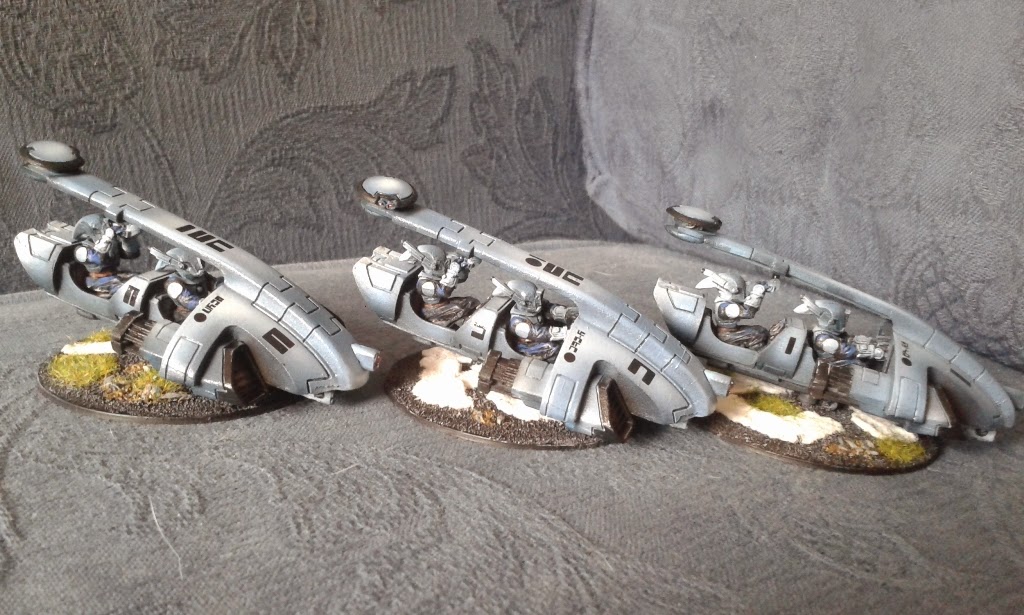 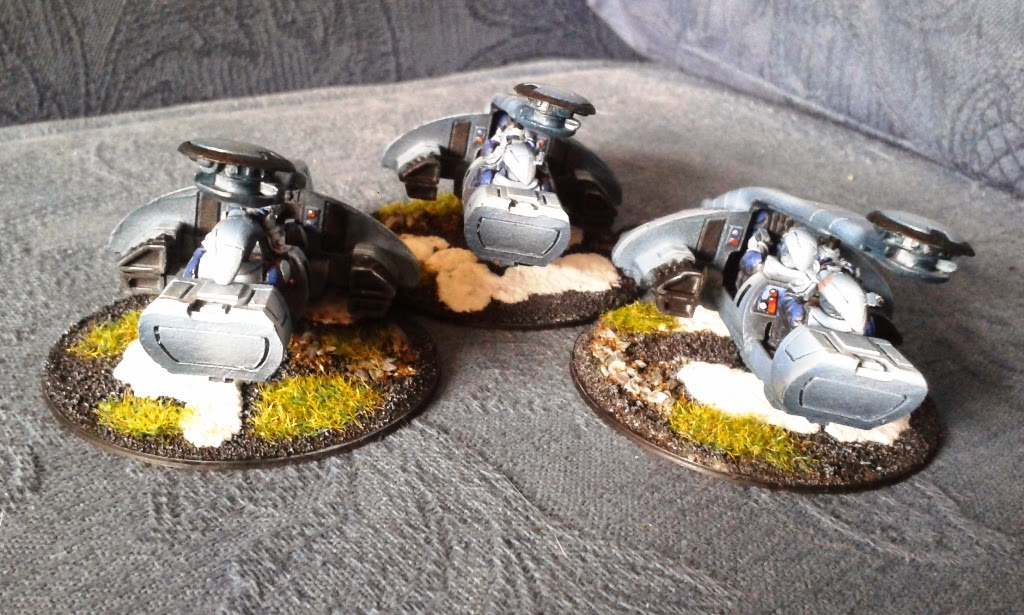 Really looking forward to tackling the rest now, which is nice as I was dreading it before!


More Tau-related stuff:
Posted by Dean Kelly at Wargames Wasteland at 04:10 No comments: