This is an Ork Stompa that I scratch-built in a hurry for a game of Apocalypse that was played at Warhammer World early in 2009. It formed part of a hastily thrown-together Ork Army which teamed up with Mike's Necrons in order to lose to Jamie and his friend Sean's combined Marine forces.

It was an immense game (6500pts per side) and featured the Warhound Titan and a scratchbuilt Ork BattleWagon and Necron Monolith amongst others.

The model is shown here with just a quick brown-spray undercoat and a bit of drybrushing- I'll get it painted eventually.

For its basis, the model is built from 2 octagons of foamboard, one twice the size of the other. One forms the base of the body, and the other the top (sitting just below the shoulders). The two are held in place by a 1/2'' plastic tube which runs from top to bottom, through which is "skewered" a 1/4'' tube in a cruciform - the 1/2'' tube forms the "spine" and the 1/4'' tube the arm-mounts.

The two octagons, if looked at from above are positioned such that the smaller one is placed with it's back edge directly above the back edge of the base. This makes for a good slope down the front of the model. I made side-plates by simply resting the model on its front/sides/back in turn on a piece of card and marking with a pen where the corners of each octagon side rested. I cut these out, glued and pinned them in place and this gave me a fully enclosed and interestingly shaped "box".

The shoulder platform is just a rough-cut unevenly shaped piece of foamboard. The Close-Combat weapon is a plasticard construction based loosely on a leg from the Warhound Titan model. The weapons shoulder is a roughly shaped card box (not quite rectangular when seen from above - there's a "dip" in the middle) which has been drenched in every weapon and missile-looking goody I could find (the big fat looking missile on the underside and the missile protruding from the Stompa's belly are actually the scavenged remains of some fireworks I found in the park, the rest came from the bits box or were scratch-built (the Gatling gun). 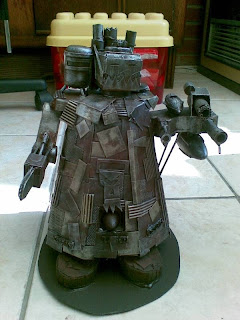 The head is built from card and plasticard, the spotter's nest came from inside a Kinder chocolate egg (I just cut a card rectangle for the window and another for the door at the back). The Spotter's nest struts and weapons arm support were made from some carbon fibre rods I bought from my local hobby shop. The exhaust pipes behind the head are simply some 1/4'' pipe cut roughly and glued in place.

The entire thing is then festooned with cardboard and plasticard plates, overlapping each other at random. The corrugated iron plates were courtesy of a roll of corrugated card bought from a craft shop - you get a roll about 1m x 50cm for about £2.00 and just cut to shape. The metal mesh comes from a car repair shop - it's use for glueing behind holes in car bodywork and you can then layer filler up on top to fill the hole. Again - quite inexpensive.

The majority of this model is simply cardboard - I doubt if the whole thing cost more than £8.00 to build.

The paint-job is unfinished - just sprayed brown/black and drybrushed with a few different metal colours so far.
Posted by Dean Kelly at Wargames Wasteland at 01:37