Every good besieged castle needs something horrible they can throw over the ramparts onto attacking foes.

Although why I'm making it when I'm going to be playing the attacking force is beyond me. Masochism I guess.

Anyway, as we'll be using the Warhammer 6th Edition rules, that calls for us to have at out disposal some rocks and cauldrons (which can contain several different unpleasant concoctions).

I've decided to build these on 1'' round (W40K) bases and only to build a small number of them too - just enough that each unit so equipped can be allocated one as a marker to say they have purchased them. I guess in reality there would be many of them scattered all over the battlements, but that's more work than I'm happy to do right now. Keep it simple - I've got enough on my plate.

This is a two-part post. In this, the first part, I take the "Piles of rocks" from start to finish and in the second I'll deal with making the "Cauldrons".

I've always thought the easiest way to represent rocks is to use rocks. These come from a bag of aquarium gravel which has a great "rocky" look to it.

The first thing I did was to PVA on a ring of sand for a bit of base texture. 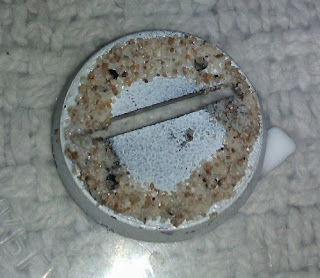 When dry, add a generous amount of PVA to the middle of the base. 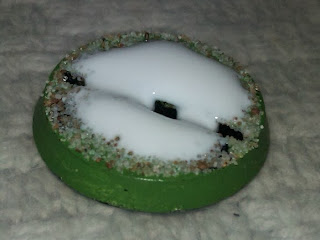 And cover with gravel. 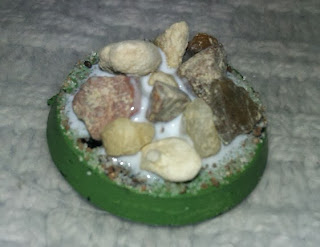 When dry, add another layer of PVA and gravel. Do this as many times as you need to to get the size and shape of rock pile you want. 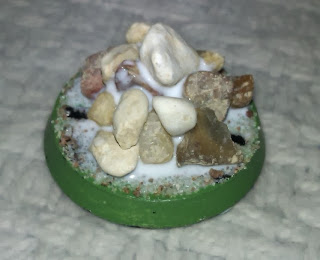 I was actually lazy about this and did it all in one go without waiting for the PVA to dry, which is why you can still see the white glue on the bottom layer of stones in the final picture. You can do it that way, but you will find your stones slipping and sliding around as you add more to the bases. Better to wait for it to dry.

You definitely need it to be dry for the next bit. Paint the whole thing black, then drybrush the stones (only - avoid the sand) with some Citadel "Bronzed Flesh". You could use any sandy, tan or grey shade you want here. My castle model is going to be grey and I wanted these to stand out from it so I went with a flesh-tone. 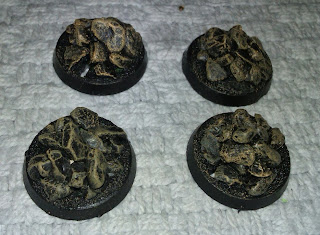 Then add a final drybrushed highlight of white (and I did hit the sand this time). 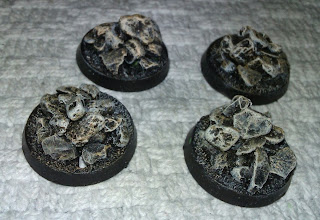 Job done. You can obviously make great use of this technique for scenery pieces too. Glued to 4'' x 1'' strips of plasticard this technique makes brilliant dry-stone-walls, for example.

I started by taking 1'' round bases and drilling four small holes at "opposite corners" (if a round base can be said to have such a thing). 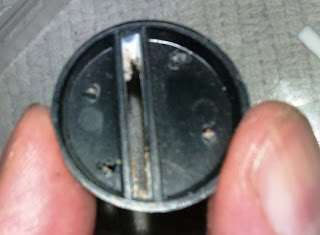 I then PVA glued a ring of sand to the top in the same way as had been done for the rock piles.

The holes were there so that I could anchor the cauldron's feet to the bases. To make the feet I cut some large paperclips to length and bent them into "V" shapes. Two for each cauldron.

I then pushed these through the holes in the base. One is shown on its side so you can see the wire bent over to fix it down. I'm not sure why but I painted the sand black before I did this bit. 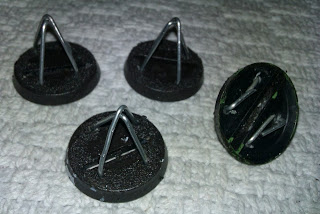 A blob of glue from my hot-glue gun fixes these permanently in place. 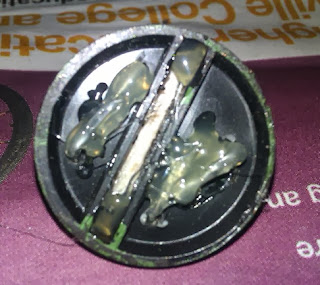 I then PVAd some broken lengths of balsa wood to the top of the base to represent the woodpile that is (hopefully - depends on my meagre sculpting ability) going to be burning to heat the cauldrons. 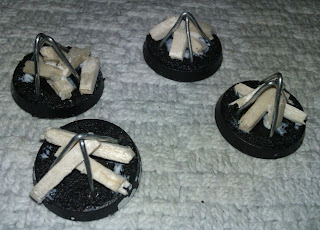 This is the point where I stopped being happy with my progress. The plan from here was to add a lump of Milliput to form the contents of the cauldrons. It would also serve as an armature for the cauldron itself which will be sculpted around the armature. However, what I found was that my Milliput was cracking and breaking as I worked it and I couldn't get it to satisfactorily form around the interlocking wire "V"s. As such I kept mis-shaping it and pushing it off-centre and so on. I did the best I could with it and then left it to look at it with fresh eyes after a day or two. At this stage I also inserted into the Milliput some more bits of paper-clip (taken from small paper-clips this time) bent to represent the handles of the cauldrons. 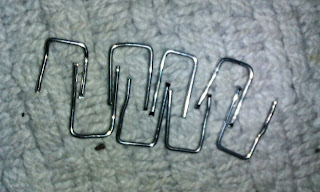 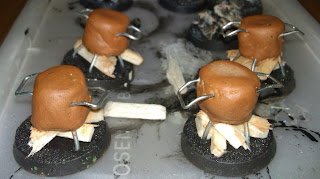 These look pretty rough from the photos, but we'll see what happens. I'm concerned that my Milliput may have "gone off" from the way it was behaving when I was working it. If so they may not even set hard.

I decided after reviewing it to press on to the next stage and add some green-stuff to form the cauldron around the milliput. I was fairly pleased with the result: 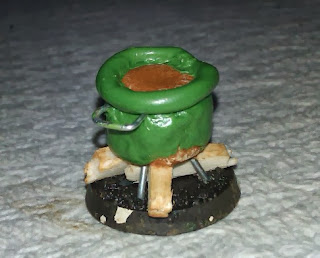 I did find the green stuff quite tricky to work with though - it was far stiffer and stickier than I was expecting, making it quite difficult to shape especially as it was constantly sticking to my fingers and tools.

Once I'd got all four cauldrons to this stage, I added some milliput "flames" around the base: 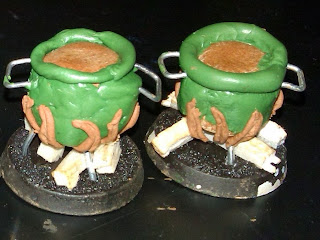 Which just left me needing to apply some paint. A spraycan black basecoat was applied, followed by some "chainmail" drybrushing to the cauldron, some layers of browns to the wood and the "oil" and lastly a white basecoat with layers of orange, yellow and finally a white highlight to the flames and the job is done:

They're a bit "rough-and-ready" and the rims are decidedly wobbly, but at the end of the day it's only been 2.5 hours work to make some simple markers to show which units in the castle have access to vats of boiling unpleasantness to tip on their foe, so I think they'll do the job nicely. I'm certainly happy enough with them.
Posted by Dean Kelly at Wargames Wasteland at 02:24