The objective for this week is to get your model(s) built so I've been busily drilling, pinning and gluing and this is what I've produced: 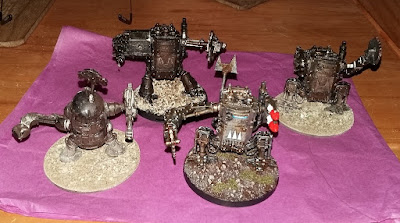 So all those bits have resolved themselves into four models. Some improvisation has had to be done. I mentioned before that this was a pile of eBay junk. If you look, you will see that only the model with the red-tipped missiles actually appears to be a complete Killa Kan.

The model behind it to the right has an improvised left arm (I think there should be another joint but there's a bit missing).

The model behind it to the left is sporting a right-arm the like of which I have never seen. It certainly looks Orky, but seems way too big for a Kan. Also, I didn't notice at first but it doesn't have regular Kan legs - they are actually legs from an earl 1990's Epic scale (6mm) Imperial Reaver Titan model! I happen to know this for a fact as I'm part-way through painting one for my Epic Ultramarines project.

Front left is a legacy Ork dreadnought from way back in the Rogue Trader era, but the original hatch is long lost so this is a Rogue Trader Rhino hatch with a boss-pole that was originally from one of the other Kans but snapped off. Since the RT model is comparatively light on detail I thought it might work better there.