The Knights of House Putrefacio.

House Putrefacio were a once-noble order of Knights, based on what was the Forge World of Putro.

Their decline from nobility began when they marched to war in support of the Solar Auxilia during the Horus Heresy. 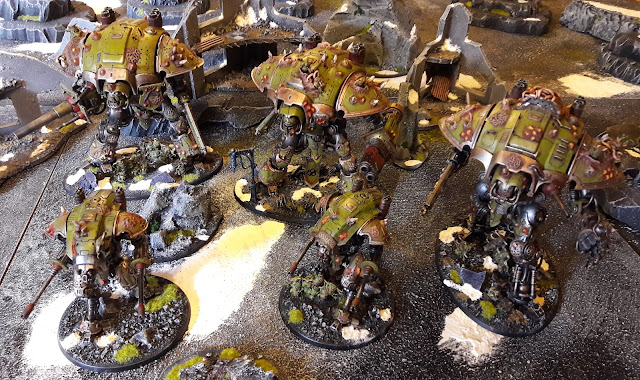 Deployed to the Imperial Compliant world of Skrabo IV which had suddenly ceased communicating off-world in any way, an Imperial scout vessel was sent to investigate. The sole transmission the vessel sent back before all contact was lost made it clear that Skrabo IV was in trouble. There was evidence clear from orbit that the cities were in flames and that the planet's atmosphere was a disgusting soup of noxious, corrosive poison.

It was clear that something needed to be done, so Putrefacio and a company of Solar Auxilia equipped with bio-hazard equipment were dispatched to investigate.

Deployed to the surface of the planet in the planetary capital, they were immediately attacked by a shambling horde of shuffling, zombie-like humanoids, dripping with decay and ichor.


A fighting withdrawal into an Administratum building gave the dwindling numbers of Solar Auxilia some refuge, but it was quickly apparent that the decay that had swept and destroyed the planet was taking its toll on the Solar Auxilia forces; weapons were failing, haz-mat suits were coming apart at the seams and as each one failed it's occupant would quickly succumb, flesh sloughing from his bones. Worse, is that a short time later, the afflicted soldier would rise and turn on his own squad-mates.

It was a matter of hours after deployment before the Solar Auxilia were wiped out, either by the relentless attack from the zombie-creatures, the disease-ridden atmosphere or by being murdered by their own colleagues.

Putrefacio lasted longer: Sealed into their mechanical mounts the riders could only watch in horror as the Auxilia perished. Whilst defending themselves against attacks from the ruined inhabitants of Skrabo IV, they were forced to turn their weapons also on the Solar Auxilia as they too joined the offensive against them after rising from the dead, swelling the enemy ranks.

They continued to fight their withdrawal into the planetary capital, crushing swarming hordes of zombie-like attackers underfoot.

In orbit, military observers watched with horror the events from the planetary surface. Helmet-cams, vox-units and sensor data from the Knights made it clear that the planet was unrecoverable. Plans were made to withdraw House Putrefacio and destroy the planet with an Exterminatus.

Before the Mechanicum could deploy their lifters, however, communications with the Knights faltered and eventually failed entirely. Assuming the worst, the Exterminatus order was given and Virus missiles launched at the surface of Skrabo IV.

On the planetary surface, however, the knights of Putrefacio continued to battle on. The communications failure was an effect of the corruption of the local atmosphere rather than an indicator of the demise of the Knights. As the Virus bombardment came down, Putrefacio were caught in the middle of a raging storm as the planet-wide corruption and Imperial Virus raged around them, first fighting, then merging and exacerbating each other's effects.

The Virus bombs did not have the desired effect. The corruption in the atmosphere and on the planetary surface fed on the Virus as it in turn fed on the corruption. Hermetically sealed inside their mounts, Putrefacio could only watch in horror as the world churned around them, the atmosphere boiled, storms raged, the surface heaved and the skies split asunder.

Realising that their masters had bombarded the planet with them still on it, the riders of the Putrefacio Knights howled in anguish as they felt the depth of the betrayal that the officers on the orbiting craft had visited upon them.


Whilst the Virus raged around them, being twisted and corrupted by the putrefying infection that had been devouring the planet, Putrefacio could feel their noble mounts beginning to twist and change around them through their sensoria and manifold links. They began to detect something else as well - a presence that had not been apparent before.

Slobbering forward through the raging, boiling clouds came the huge bulk of a Daemon, oozing slime and leaking pus from rents and fissures about its mammoth bulk. It felt the rage and anguish of the knights and came to them, offering an opportunity for survival and more. 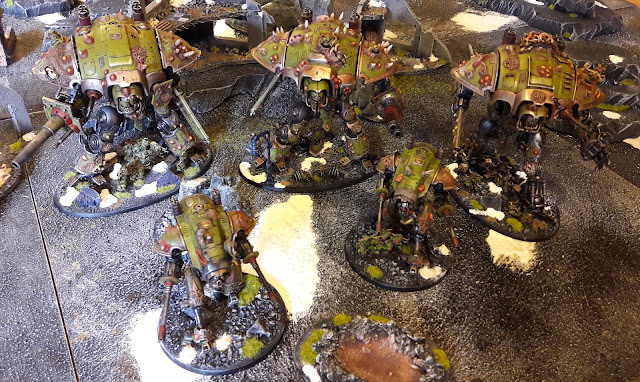